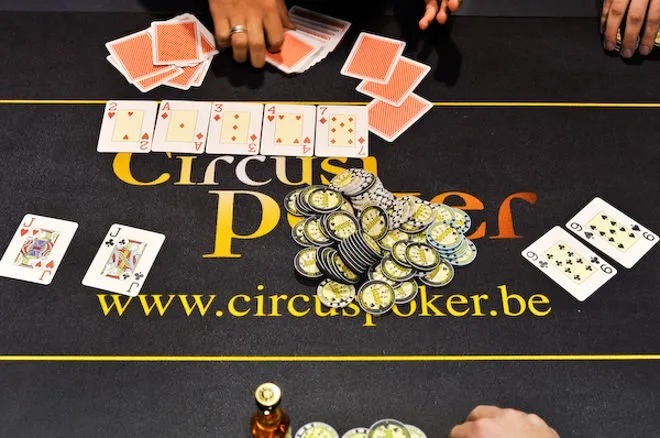 The game is $1/$2 no-limit hold’em. A player raises to $8 from early position and it folds around to you in the cutoff where you’ve been dealt {7-Clubs}{7-Diamonds}. You decide to call and everyone else folds.

The flop comes {K-Spades}{5-Hearts}{4-Diamonds}, your opponent bets $12 and you call. You both then check the {5-Spades} turn. The river is the {10-Diamonds} and your opponent fires another $20 into the middle — that is, a little less than half the pot.

You think your sevens might be good, but ultimately decide to fold your hand. The dealer pushes the pot to your opponent, collects the cards, and as another hand is dealt you sit and wonder what your opponent might have had.

He could have had a king, you think, although his checking the turn makes that seem less likely. Or maybe he had a pocket pair himself, one better than your sevens. Or ace-ten. Ace-jack? Without a showdown, you just don’t know.

But what if you did call that river bet? The hand your opponent turns over potentially reveals a lot of information about that player. Indeed, if this hand were happening between two other players and you weren’t involved, you’d do yourself a lot of good sitting up in your chair and getting a look at what the players were showing down after the river call, as that information could be of great benefit to you going forward.

Let’s imagine the river bettor turning over a few different hands here after you call that last bet. The completed board is {K-Spades}{5-Hearts}{4-Diamonds}{5-Spades}{10-Diamonds}, and after raising from early position preflop, continuation betting on the flop, checking the turn, then betting again on the river, he turns over…

{J-Clubs}{10-Clubs}
Heck, he rivered a better pair, you think, as you muck your sevens in frustration. But wait… you’ve lost the pot, but you’ve gained a lot of information.

For one thing, you now know your opponent to be a player capable of opening from early position with medium suited connectors (i.e., not just with premium starting hands). He also can continuation bet even when missing flops, so he knows something about the advantages of being aggressive and keeping the initiative when he has it. Meanwhile he did not keep barreling on the turn, meaning he was perhaps wary of your flop call (and not a total maniac).

Then when the 10 came on the river he made an interesting value bet. Or maybe it was a blocking bet designed to keep you from betting more. In any case, you’ve got a lot to work with the next time you get involved in a hand against this player.

Or say on the river he bet, you call, and he turns over…

{K-Clubs}{K-Diamonds}
Oof, you were crushed, you think. Good not to have lost any more than you did. Again, though, set aside the result and look back through the hand. What does the hand tell you about this player’s style?

For one thing, the preflop raise and continuation bet on the flop are both less remarkable — more “standard” than with jack-ten. He then checked the turn after improving to a full house, a slow play likely decided upon in the hopes that you’d fire that turn rather than check behind. The river bet, then, was clearly for value, and it did earn him some more on the end.

Or let’s say things turned out better for you following your river call, as he turns over…

{A-Spades}{J-Spades}
You’re stacking chips, but don’t let the joy of having made a correct call get in the way of reviewing what just happened — in particular what the hand reveals about your opponent.

Ace-jack suited is a better hand than jack-ten suited, although opening from early position with it still represents a somewhat aggressive play. His continuation bet was standard, but he chose to check the turn despite picking up the flush draw. Then when the spade didn’t come, he bluffed the river. The combination of the turn check and smallish river bluff perhaps suggests he can be aggressive before and after the flop, but tightens up on the turn and river.

The fact is, practically every hand that goes to a showdown is going to offer similar insights into your opponents’ styles, including information about their starting hand selection, the attention they pay to position, their bet sizing as it relates to relative hand strength, their preflop and postflop tendencies, how they bluff or value bet, and more.

Don’t forget also that whenever you make it to showdown, you are also revealing information to your opponents about how you play. Here you showed a willingness to call from late position with middle pair, to stick around even with an overcard to your pair appearing on the flop, to show caution on the turn and not take the opportunity to bet when given an opening, and to call on the river despite having only a medium-strength hand.

Going forward, be mindful of how your image might have been affected by these actions, knowing that others may peg you as a “sticky” calling station, or a player who understands the power of position, or a cautious and/or passive player — all impressions you might then exploit in a subsequent hand.

Some showdowns reveal more than others. It happens sometimes that players catch a run of good cards causing them to reach more showdowns than usual, thereby giving an impression that may or may not fit with their actual playing styles.

But almost no showdown is without significance. Every time hole cards get turned over, the chips go to the player with the best hand. But the information is available to everyone, with those paying the most attention reaping the greatest rewards.

Renewal of Hard Rock Casino License Could Be Put at Risk...