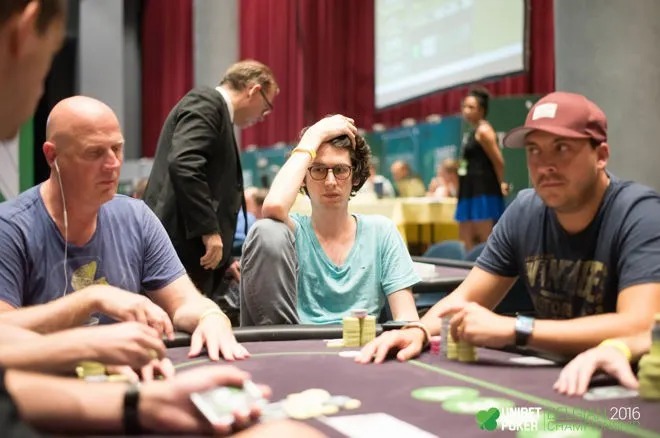 Today will be the last of a few articles I’ve written on poker insights I’ve found from reading the work of Robert Trivers, a prominent evolutionary biologist who has extensively studied the role of deception in both humans and other species.

I’ll jump right into three more such insights. Again, I think you’ll readily see what Trivers says about deception reveals something important about what happens at the poker tables.

Trivers devotes more space to self-deception than to other forms. Human beings are exquisitely refined self-deceivers — and if you think you’re not self-deceptive, it’s only because you are!

He describes one experiment in which “people were convinced that they were likely — or highly unlikely — to be chosen for a prospective date.” If they were convinced they were picked for a date, “they spent slightly more time studying the positive rather than negative attributes of the prospective date, but if [they weren’t], they spent more time looking at the negative, as if already rationalizing their pending disappointment.”

Trivers tells of another experiment in which people were played an audio tape of someone describing the dangers of smoking, with the subjects explicitly told to pay attention to the content.

“Meanwhile, there was some background static and the subjects had the option of decreasing its volume,” he continues. “Smokers chose not to decrease the static, while nonsmokers lowered the level, the better to hear what was being said.”

Scientists have conducted thousands of such experiments. Test subjects consistently show this kind of bias — we look harder for and pay more attention to the information that tells us what we want to hear, encourages us to do what we want to do, or reinforces a decision we’ve already made. We tone down and filter out contrary messages.

Mike Caro has long warned about the danger of using poker tells in this selective way. For example, in an article titled “Great Mistakes in Poker Tells,” Caro explained how “When it comes to tells, you’re apt to overestimate the value of ones that invite you to call and ignore ones that suggest you should fold.”

You can see the problem.

“If you use tells in that manner, you’re making a great mistake,” Caro continues. “That mistake is so common and so serious that if you can’t shake the habit, you’ll probably make more money by just ignoring tells altogether.”

Most deception having to do with one’s strength, ability, or aggressiveness is biased upward, projecting more than is actually present. Pufferfish inflate their bodies, cats stand their fur on end, and all sorts of animals selectively use lower-pitched vocalizations — all with the goal of seeming bigger and more threatening than they really are.

“But there is a second kind of deception — deceiving down,” explains Trivers, which is what happens when an organism tries “to make itself appear smaller, stupider, and perhaps even uglier, thereby gaining an advantage.” For example, he tells of how in different kinds of seabirds “offspring actively diminish their apparent size and degree of aggressiveness as fledglings, to be permitted to remain near their parents, thereby consuming more parental investment.”

There are various reasons for such “deceiving down.” “Appearing less threatening may permit you to approach more closely,” he writes. “This is a minority strategy that probably owes some of its success to the fact that most people are doing the opposite, so our guard is not as well developed in this direction.”

In other words, being less conspicuous — and seeming less threatening — can thereby enable the deceivers to act more freely and get more of what they want.

I can’t find the exact quotation, but I remember once in a World Series of Poker broadcast thatNorman Chad said of Allen Cunningham something like, “You don’t even notice he’s there until he’s stacking your chips.”

I’m a naturally quiet, shy, solitary person, so I can’t easily slip into the role of the gregarious, chatty, social animal at the poker table, despite knowing that it would be more profitable. Instead, my strategy is to emulate Cunningham — a goal I achieve in demeanor far more than in skill.

That is, I try to be pretty much invisible, somebody that is easily overlooked as a threat. I don’t want to set off anybody’s alarms. To that end, I don’t talk during hands. I don’t bluster, taunt, or trash talk. I don’t expose my knowledge of poker math, strategy, or history. I just sit and play, hoping to leave with a nice profit before anybody realizes I’m winning.

Trivers is, of course, far more sensitive to the perils of self-deception than most of us are, having spent his career studying it. Yet he admits that he can still fall victim to it in embarrassing ways. He is guilty, in fact, of a fault most of us have — repeating our mistakes over and over.

“Take one common problem I have involving both conflict and self-deception,” Trivers confesses. “Someone does me harm, and I imagine a spiteful response, a nasty letter or some other gesture of contempt.”

“Then the submerged side of me says, ‘But, Robert, you have been in this situation 614 times already and you have talked yourself into the spiteful action, yet in every case shortly afterward you regret your action. This is no different. Do not do it.’ And then the dominant part of my personality comes roaring back. ‘No, this time is different. This time I will feel satisfied and happy.’ And there goes number 615.”
I think if that confession doesn’t elicit a chuckle of self-recognition from you, you must be some sort of pod-person, not a real human. We’ve all been there, right?

There’s a guy I play with often in a penny-ante (almost literally) home game. He never goes all in on the river unless he has the stone-cold nuts. But I swear I must have called him with a second-best hand ten times after I had figured that out about him.

Each time I thought, “Well, he knows that when he’s made that bet before, he’s always shown me the winner. So surely this time he’s taking advantage of that history to bluff me out of the pot.” So I call. Again. And lose. Again.

I’ll bet that with not too much effort you can think of a similar kind of mistake that you have repeatedly made while playing poker — maybe even after you had recognized it as a mistake that you should fix. And I’ll bet further that if you reconstruct the decision process that has led to repeating that mistake, you’ll find a prominent element of self-deception, some way in which you talked yourself out of the right move and into the wrong one. Our train of thought tends to derail in the same way time after time.