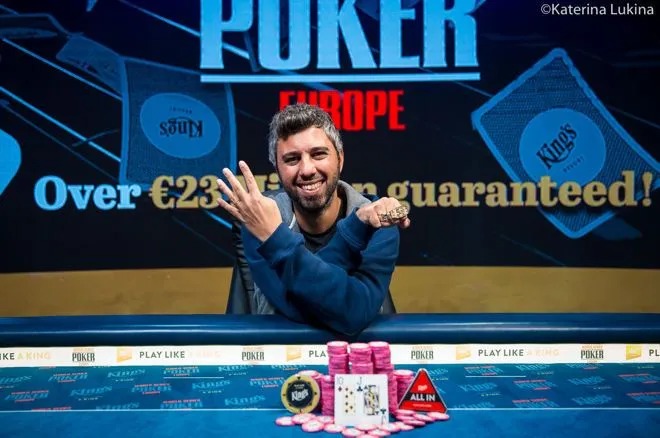 Asi Moshe has become the 50th player in WSOP history to win four or more gold bracelets. The Israeli poker pro joined this illustrious group by topping a field of 279 entries to secure the title in the 2019 WSOP Europe €1,650 no-limit hold’em and pot-limit Omaha mixed event. Moshe earned $108,186 USD as the champion of this event, managing to emerge victorious despite not having much experience playing PLO in a live setting.

“It’s really crazy, especially considering I don’t really play Omaha, just a little bit online but just the way I pick up the cards feels really weird,” Moshe told WSOP reporters. “But poker tournaments are poker tournaments, it still worked out. I looked at the ICM and I got many chips so everything worked out but I’m not an Omaha player for sure.”

Moshe entered the final table of this event as the chip leader with nine remaining. The first player to hit the rail was six-time WSOP bracelet winner Chris Ferguson (9th – $7,651 USD). He and Quan Zhou (8th – $9,836 USD) both fell to Harout Ghazarian in the early going.

Dragos Trofimov got his last chips in wiith pocket aces, but his AHeart SuitADiamond SuitQClub SuitJHeart Suit could not beat out the QDiamond Suit8Diamond Suit7Heart Suit5Heart Suit of Kristoffer Rasmussen, who had turned a straight on a 6Heart Suit5Spade Suit2Heart Suit4Spade Suit board. Trofimov had outs to a higher flush draw, but the 9Diamond Suit on the river sealed his fate. He earned $12,900 USD as the seventh-place finisher.

From that point on, it was all Moshe. He scored every single knockout from six players down to one. He started by busting WSOP braceler winner Erik Cajelais in sixth place, beating out his QHeart SuitJHeart Suit with AHeart Suit5Club Suit to further extend his lead. Cajelais cashed for $17,258 USD.

Moshe had more than five times as many chips as his nearest opponent at one point during five-handed play. He procedded to knock out Jakob Madsen (5th – $23,539 USD), William Chattaway (4th – $32,723 USD) and Harout Gharazian (3rd – $46,347 USD) to take more than a 7:1 chip lead into heads-up play against Kristoffer Rasmussen.

It took Moshe just two hands to seal the deal. He shoved with JClub Suit10 and got called by Rasmussen, who held QHeart SuitJSpade Suit. The board came down KDiamond SuitQSpade Suit8Club Suit9Spade Suit6Diamond Suit and Moshe turned a straight to lock up the pot and the title. Rasmussen took home $66,855 USD as the runner-up.