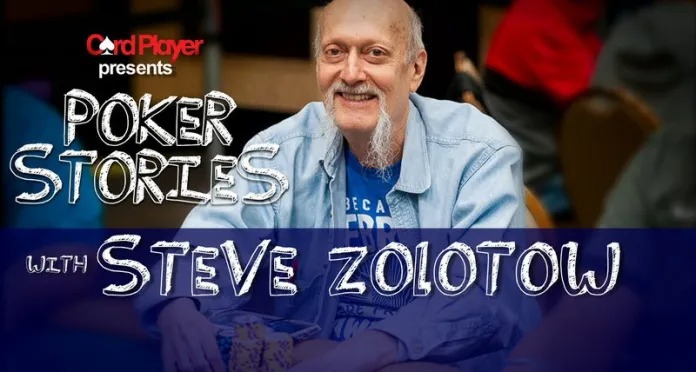 Steve Zolotow has been gambling for the better part of six decades, and that’s only a small part of what has been an extraordinarily eclectic life. Born into a famous family of writers that hobnobbed with the Hollywood elite, Zolotow dropped out of the Ivy Leagues to pursue a life of gambling, drugs, women, and even an acting career.

It was gambling that led Zolotow to the Mayfair Club, which started as a bridge and backgammon space before becoming a secret poker club that produced legendary gamblers such as Erik Seidel, Jay Heimowitz, Mickey Appleman, Howard Lederer, Stu Ungar, Paul Magriel, and Dan Harrington. When he wasn’t wagering up to $1 million a week with his sports betting operation, Zolotow was playing high-stakes poker with VIPs like Larry Flynt. Zolotow also has two World Series of Poker bracelets, having taken down a Chinese poker event in 1995 and a pot-limit hold’em event in 2001.

Highlights from this interview include a family of famous writers, ignoring Marilyn Monroe to play with horses, sharing a bed with Elizabeth Taylor, getting acting compliments from Lee Strasberg, dropping acid and dropping out, getting beaten out of the army, a three-some proposal leads to a marriage proposal, Stu Ungar cleans up in bridge, poker comes to the Mayfair Club, how to Moss-proof your loose change, how X-22 almost lost his Cox, up to $1 million a week in sports bets, avoiding jail time in Las Vegas, a Chinese poker bracelet, avoiding going broke, $2k-$4k stud with Larry Flynt, real estate sticker shock in NYC and SF, losing a $300k pot to Lyle Berman, and why you can’t drown a fly.

Catch up on past episodes featuring notables such as Daniel Negreanu, Justin Bonomo, Nick Schulman, Barry Greenstein, Michael Mizrachi, Bryn Kenney, Mike Sexton, Brian Rast, Scott Seiver, Freddy Deeb, Chris Moneymaker, Maria Ho and many more. If you like what you hear, be sure to subscribe to get the latest episodes automatically when they are