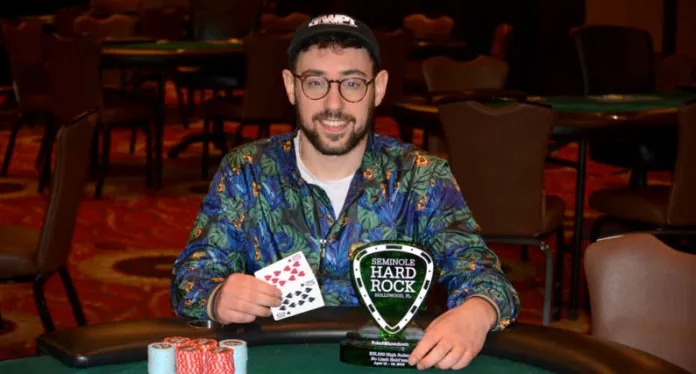 The 2019 Seminole Hard Rock Poker Showdown $25,000 no-limit hold’em high roller event drew a total of 99 entries, easily surpassing the $2 million guarantee to create a final prize pool of $2,445,300. In the end, the largest share of that money was awarded to eventual champion Aaron Mermelstein. The two-time World Poker Tour main event winner earned $618,955 and his first high roller title for the win.

“I live here part-time now so for me it’s nice to get a big win here especially against a lot of the tougher competition,” Mermelstein told Seminole Hard Rock Poker Blog reporters. “Feels sort of like home. It feels good. This is my first cash in a $25K, so it’s nice to win the first one.”

In addition to the SHRPS trophy and the big payday, Mermelstein also took home 756 Card Player Player of the Year points. This was his second final-table finish of the year, and it was enough to see him move into 152nd place in the overall standings.

Play resumed on day 2 of this event with 16 competitors remaining and only the top 14 set to make the money. Jonathan Jaffe was knocked out on the bubble, running KClub SuitJClub Suit into the pocket kings of Alex Foxen.

Mermelstein took the outright lead by eliminating Niall Farrell in sixth place. His pocket nines held up against the ASpade SuitQHeart Suit of Farrell to send the Scottish poker pro home with $100,255.

McKeehen ended up falling to the bottom of the leaderboard again by the time the next big hand arose. Mermelstein raised to 175,000 from the button with blinds of 50,000-75,000 with a 75,000 big-blind ante. McKeehen moved all-in for 1,550,000 from the small blind. Foxen shoved from the big blind and Mermelstein folded. Foxen had picked up the AHeart SuitAClub Suit. McKeehen held the KSpade SuitQClub Suit. The board ran out KHeart Suit10Heart Suit3Spade SuitJClub Suit5Heart Suit and McKeehen was knocked out in third place ($305,665).

Here is a look at the payouts and POU points awarded at the final table: