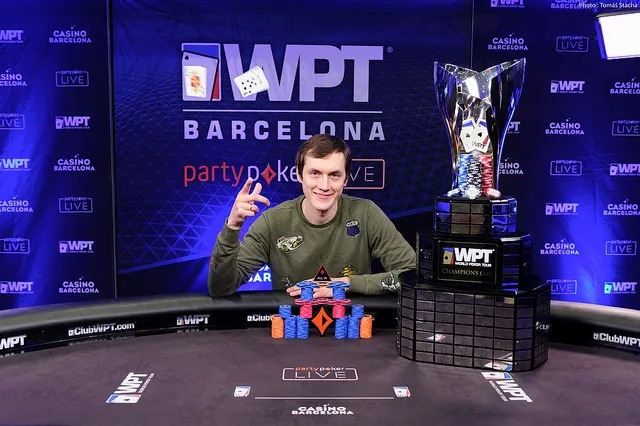 Vitalijs Zavorotnijs has been crowned the Season XVII WPT Barcelona €3,300 Main Event champion after the Latvian came through a 1,227 player-field at the Casino Barcelona.

Zavorotnijs defeated Boris Kolev heads-up for the win in a heads-up match that lasted just three hands, to become the latest inductee into the WPT Champions Club.

The WPT Main Event headed to Barcelona with a €3,000,000 guaranteed prize pool, but after 1,227 entrants took part, it became the second-largest Main Event of Season XVII, alongside a prize pool worth €3,570,570.

Zavorotnijs came into the final table of six as the joint chip-leader and won a 15m pot with four players left to push ahead further, and he never looked back from there.

Speaking after his victory, Zavorotnijs said:

“How I feel right now is hard to describe. A mix of emotion and exhaustion. I’m really tired and really happy! When you work hard for something, and it happens, to be in this spot right now, it feels like a dream come true.”

Zavorotnijs’ win came less than four weeks after his first tournament victory of 2019 when he won a then-career-best €85,300.

“I haven’t changed how I have played this year, but I do feel more mentally prepared. I know I can play well, but I also know you cannot win without luck, and I’ve had luck.”

“I’ve come into poker from a sports background, and I’ve matured and got less titled” added the former professional volleyball player.

“I am now going to spend some more time with my wife, who won a satellite into the Main Event this week, and my four-year-old daughter. Then I will go to Vegas for the WPT Tournament of Champions.”

Action of the day

When the play began shortly after Noon local time, the final six was almost immediately reduced to five, when Alain Zeidan was eliminated in just the eighth hand of the day.

Boris Kolev raised from under the gun with pocket queens and saw Niko Koop call with king-jack in the cutoff. Zeidan pushed his last 11 big blinds into the middle with pocket nines from the small blind, only to see Zavorotnijs call from the big blind with ace-king. Kolev also called before Koop folded and the flop fell deuce-five-queen. They checked to the three turn card, and Kolev’s 800,000 bet was enough to get Zavorotnijs to fold.

Zeidan then found out the bad news he was drawing dead and even hit a set of his own on the river to add insult to injury. The Lebanese player departed from the table and took away €120,000 for his efforts.

Kolev and Koop then pushed themselves ahead of the pack as start-of-day chip leaders Eric Sfez, and Zavorotnijs dropped.

Jerry Odeen was unable to find himself an opportunity to increase his stack having started the Final Table with 22bbs and ultimately departed in 5th place. Zavorotnijs raised to 400,000 from the button with ace-five, and Kolev called in the small blind with pocket tens. Odeen moved all in for 975,000 after he looked down at queen-jack and both his opponents called.

Zavorotnijs and Kolev checked to showdown after the board fell king-four-nine-six-eight. Odeen sees Kolev’s winning hand and departed the final table to collect his €160,000 prize money.

In the very next hand, the whole table dynamics changed when Zavorotnijs doubled through Koop.

The flop was down ten-eight-three, and Zavorotnijs held the straight flush draw with jack-nine of clubs. Kopp held ten-eight for two pair and had checked raised a bet of 325,000 to 1.1m, which Zavorotnijs called.

Zavorotnijs then called a 1.5m bet from Kopp on a brick turn, and the river was the seven of hearts, which gave Zavorotnijs the straight. Kopp’s check led to Zavorotnijs moving all in for 4m and Kopp ultimately called.

Zavorotnijs took the big chip lead, and Kopp couldn’t find a way back and exited in 4th place for €215,000 just two hands later when his ace-queen lost to Zavorotnijs’ pocket tens all-in preflop.

When the final three returned from a short break, Zavorotnijs had 50% of the chips in play. Kolev then survived when his four-bet jam with ace-five from the button was snap-called by Sfez in the small blind with pocket kings. However, the Bulgarian found an ace on the flop to double.

Short stack Sfez then found a double of his own through Zavorotnijs, and the action went back and forth between the players but Sfez and Kolev were unable to put a dent in Zavorotnijs’ stack.

Kolev then raised to 400,000 from the button with ace-three and saw Sfez move all in for 3.6m from the small blind with ace-nine. Zavorotnijs called after he looked down at ace-king in the big blind and Kolev folded.

Zavorotnijs held to score another knockout and Sfez’s elimination in 3rd place for €281,570 paved the way for the heads-up battle.

Once the action recommenced, it was all over in a flash. In the third hand of heads-up, Zavorotnijs raised to 425,000 with king-nine suited and Kolev, who was playing a 9,500,000 stack, three-bet to 1.7m with ace-queen offsuit. Zavorotnijs called, and the queen-jack-four flop gave him a gutshot straight draw, as Kolev hit top pair.

The turn seven of spades also gave Zavorotnijs a flush draw, and he saw Kolev move all in for 5.7m.

Zavorotnijs asked for a count and used two of his remaining time banks before he flicked in a calling chip.

The Bulgarian rail stood up from their chairs only to see Zavorotnijs hit a flush on the river to seal the Latvian’s victory, much to the delight of his wife who also played the Main Event and Ladies event here in Barcelona this week.

Zavorotnijs wins the €600,000 top-prize, which includes a $15,000 seat to the Baccarat Crystal WPT Tournament of Champions to be held in Las Vegas later this year, and becomes the first-ever Latvian WPT Main Event champion.