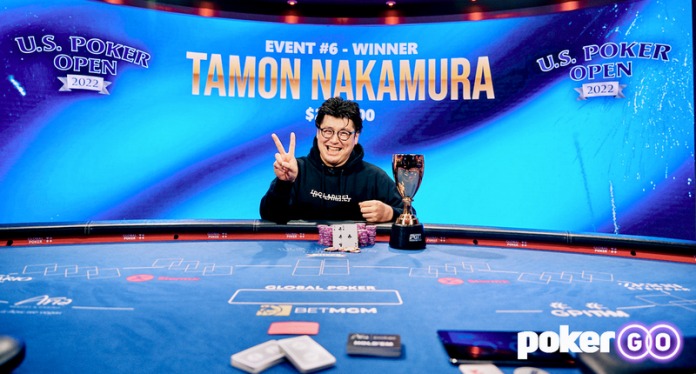 Tamon Nakamura has done it again! Just a few days removed from his first-ever PokerGO Tour victory in the 2022 U.S. Poker Open $10,000 big bet mix champion, the 35-year-old Japanese player defeated Poker Hall of Famer Phil Hellmuth heads-up to take down the USPO $15,000 eight-game mix event for his second title of the series.

Nakamura earned $239,700 for his most recent win. He has now cashed in four of the six events that have wrapped up so far at the USPO, cashing for a total of $460,900 along the way. That means that the majority of the Tokyo resident’s $705,928 in live tournament earnings have been recorded in the past week.

In addition to the title and the money, Nakamura also earned plenty of rankings points for the win. The 360 Card Player Player of the Year points he took home were enough to see him climb within striking distance of the top 100 in the 2022 POY race, which is sponsored by Global Poker. He now sits in 17th place on the PokerGO Tour leaderboard thanks to the 240 points he secured in this event. With 462 total series points, he is now the outright leader in the USPO player of the series race.

Nakamura overcame a field of 47 total entries in this event, which featured a mix of limit hold’em, Omaha eight-or-better, razz, seven-card stud, stud eight-or-better, no-limit hold’em, pot-limit Omaha, and triple draw deuce-to-seven lowball. He entered the second and final day of the tournament as the shortest stack with seven players remaining, all of whom were in the money following the elimination of Maxx Coleman on the money bubble at the conclusion of day 1.

Jeremy Ausmus was the first to hit the rail at the final table, with his last chips going in on the flop with his king-high flush draw and top pair of jacks facing the pocket queens of Ben Yu in limit hold’em. Ausmus was unable to improve on the turn or river and was eliminated in seventh place, earning $28,200 and 90 POY points for his 12th final-table finish of the year. He remains the leader in the POY race with a 592-point lead on second-ranked Tony Sinishtaj. With one win and four cashes during the USPO, he is in second place in the player of the series race behind Nakamura.

Scott Seiver three-bet with A-K from the small blind in limit hold’em. Damjan Radanov, who had raised from the button with A-10, made the call and flopped top pair on a ten-high board. Seiver made a continuation bet with his two overcards and Radanov called. Another ten rolled off on the turn and Seiver bet, leaving himself with less than a full bet behind. Radanov raised and Seiver called all-in only to see that he was drawing dead. He took home $42,300 as the sixth-place finisher, increasing his career earnings to more than $24.3 million. As a result, he is currently ranked 23rd on Card Player’s all-time money list.

Radanov climbed all the way up the leaderboard and into the top spot for a time during five-handed action, but he lost a hefty stud pot with split tens losing to the rivered pair of jacks of Nakamura, who had been drawing at a flush. He ultimately got all-in playing Omaha eight-or-better with A-Q-J-10 with a suited ace. Hellmuth scooped the pot with the nut flush and the second-nut low to send Radanov to the rail in fifth place ($56,400).

Bryan Micon’s run came to an end when he shoved his last few big blinds as the first to act in no-limit hold’em with Q-8. Nakamura re-shoved from the small blind with A-K suited and everyone else got out of the way. Micon found no help from the board and was eliminated in fourth place, earning $77,550 for his first live tournament cash of the year.

A battle of the blinds resulted in the next knockout, Ben Yu moved all-in from the small blind for 9.5 big blinds with JClub Suit9Heart Suit and Nakamura made the call from the big blind with 5Heart Suit5Club Suit. The flop came down KHeart Suit10Diamond Suit2Spade Suit to give Yu a gutshot straight draw to go along with his two overcards. The 9Diamond Suit on the turn gave him a pair of nines to take the lead, but the 5Diamond Suit on the river improved Nakamura to a set of fives. Yu was sent home in third place, earning $105,750 for his latest deep run. The four-time WSOP bracelet winner now has more than $8.6 million in lifetime tournament earnings.

Heads-up play began with Phil Hellmuth holding 3,925,000 to Nakamura’s 3,125,000. Nakamura overtook the lead thanks to a big razz hand that saw him make a seven low on the end to best Hellmuth’s eight-seven low. Hellmuth lost another big razz pot with Nakamura making a jack low to beat his queen low. Nakamura further extended his lead by winning a sizable pot with top pair against Hellmuth’s fourth pair in limit hold’em to leave the 16-time WSOP bracelet winner on fumes. In the final hand, Nakamura raised with AClub Suit3Club Suit and Hellmuth raised all-in with KSpade Suit7Club Suit. The board ran out QDiamond Suit10Spade Suit10Heart SuitQSpade Suit9Heart Suit to lock up the pot and the title for Nakamura.

Hellmuth was awarded $155,100 as the runner-up finisher. He now has more than $24.2 million in lifetime tournament earnings, good for 24th place on poker’s all-time money list.