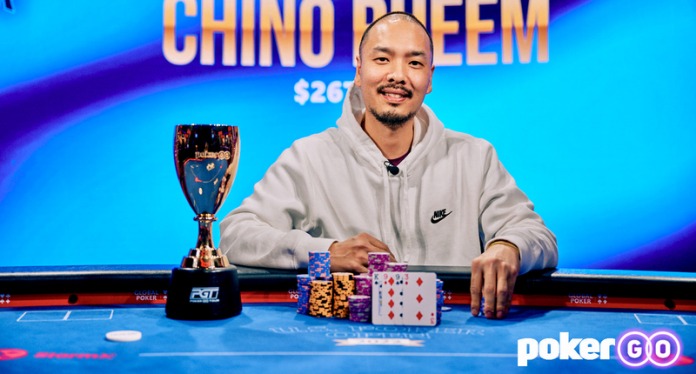 Chino Rheem is on a roll this March. The three-time World Poker Tour main event winner has secured five cashes so far this month, with three top-two finishes at final tables and one title won. His first live tournament victory since taking down the 2019 PokerStars Caribbean Adventure main event in 2019 came in the 2022 U.S. Poker Open $15,000 buy-in pot-limit Omaha event. Rheem topped a field of 67 entries to lock up the title and the first-place prize of $271,350. This latest score increased his lifetime tournament earnings to more than $11.6 million.

In addition to the title and the money, Rheem also secured plenty of rankings points as the champion of this PLO event. The 432 Card Player Player of the Year points he earned were enough to see him climb into 43rd place in the 2022 POY race sponsored by Global Poker.

This win came just one day after Rheem had finished as the runner-up in the USPO $15,000 no-limit hold’em event for another $210,000. These two big scores were enough to moved Rheem into first place in the USPO player of the series points race, surpassing Tamon Nakamura for the top spot. Rheem has earned 481 points so far this series, with the same amount of PokerGO Tour points accrued along the way. He now sits in 14th place in the PGT year-long standings thanks to these two results and a deep run in the Wynn Millions main event earlier this month.

This event saw the top ten finishers make the money, but only six advanced to the final day. Recent Wynn Millions runner-up finisher Isaac Kempton sat atop the leaderboard when play began for the day, with Rheem in third chip position. World Series of Poker bracelet winner Dylan Weisman was the first to hit the rail. He got the last of his short stack in on the river with an eight-high straight and ran into a jack-high straight for 16-time bracelet winner Phil Hellmuth. Weisman earned $61,600 as the sixth-place finisher. This was his third final-table finish of the series, with his deep runs coming in an earlier PLO event and the $10,000 big bet mix tournament.

Adam Hendrix was the next to fall, with his pocket aces being out flopped by the pocket kings of Rheem after the chips went in preflop. The USPO event no. 3 winner earned $80,400 for his third final-table finish of the series. He now sits in third place in the player of the series points race as a result.

Hellmuth’s quest for his first win inside the PokerGO Studio fell just short this time. He got a sizable chunk of his chips in preflop with pocket aces and a suited ace, only to run into a flopped jack-high straight for Rheem. Hellmuth went all-in as the first to act and Rheem quickly called. Hellmuth found no help on the turn or river and was eliminated in fourth place, earning $100,500 for his latest deep run. He now has more than $24.3 million in lifetime earnings to his name.

In one noteworthy three-handed pot, Isaac Kempton preserved a key portion of his stack by correctly laying down sevens full of aces to Rheem, who had aces full of tens. The very next hand saw both Kempton and Rheem flop trip tens. Kempton had the highest kickers, but Rheem improved to tens full of fives on the turn to take the lead. Rheem led out and Kempton shoved all-in over the top. Rheem called and Kempton was in need of an ace or king on the river to keep his hopes of a title in this event alive. The river gave Kempton tens full of fours, but it wasn’t enough and he was knocked out in third place ($130,650). With this deep run and his second-place showing in the Wynn Millions main event, Kempton is now ranked third in the 2022 POY standings and first on the PGT points race.

Rheem took more than a 3.5:1 chip lead into heads-up play with three-time bracelet Scott Seiver, who was also looking for his first live tournament title since 2019. Seiver did earn a crucial double up, with his overpair, king-high flush draw and wrap draw dominating Chino’s middle pair, lower flush draw and inside straight draw on an action flop. He held to nearly even the playing field, but Rheem was able to re-establish a big lead thanks to a turned straight earning a healthy value bet against Seiver’s rivered set of queens.

In the final hand, Seiver raised from the button with KClub SuitJClub Suit10Diamond Suit6Spade Suit. Rheem called with KSpade Suit9Diamond Suit9Club Suit3Diamond Suit and the flop came down QClub Suit9Spade Suit6Heart Suit. Rheem checked and Seiver made a continuation bet with his flopped wrap draw. Rheem check-raised with middle set and Seiver moved all-in. Rheem made the call and the turn brought the AHeart Suit. The 7Heart Suit on the river kept Rheem’s hand ahead to earn him the pot and the title. Seiver took home $201,000 as the runner-up finisher, increasing his lifetime tournament earnings to more than $24.5 million in the process.

Here is a look at the payouts and rankings points awarded to the top eight players: