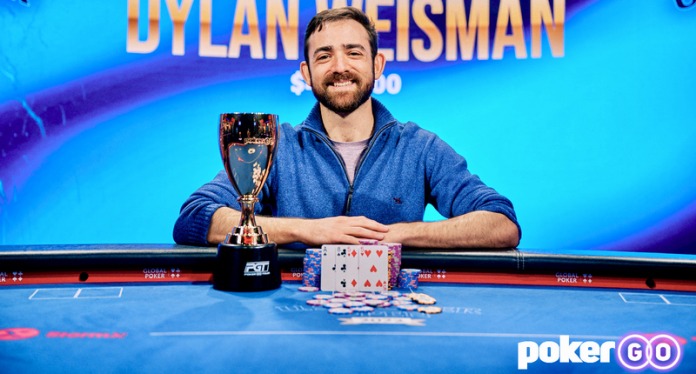 The 2022 U.S. Poker Open high-stakes tournament series featured three pot-limit Omaha events. Dylan Weisman made the final table in all three, capping off his impressive run by taking down the biggest buy-in PLO event on the schedule. Weisman overcame a field of 49 entries in the USPO $25,000 PLO tournament on Mar. 26 to earn his second career live tournament title and the top prize of $416,500.

This was the largest tournament score of Weisman’s career, blowing away the $166,461 he secured along with his first World Series of Poker bracelet in the 2021 $1,000 PLO event at the series. The 30-year-old poker player, who coaches PLO on an online training site, now has $1,037,292 in career tournament earnings.

This was Weisman’s fourth final table through the first 10 events at the USPO. He kicked things off with a fifth-place showing in the $10,000 buy-in PLO event for $61,600. A couple of days later he finished fifth again for another $42,400. That was his lone cash in a non-PLO-exclusive event. The $10,000 big bet mix event included PLO, ho-limit hold’em, and no-limit deuce-to-seven single draw lowball. The streak continued when Weisman placed sixth in the $15,000 buy-in PLO event for another $60,300. All told, he has cashed for $580,800 so far at the USPO, and is currently in sixth place in the player of the series race.

Weisman earned 420 Card Player Player of the Year points for his latest win. His four POY-qualified scores have moved him into 82nd place in the 2022 POY race, which is sponsored by Global Poker. He also sits in 23rd place in the PokerGO Tour points race thanks to his impressive run at this series.

Day 2 of the $25,0000 buy-in PLO event began with six players remaining and Weisman in the lead. He had nearly twice as many chips as the next largest stack, which belonged to Cary Katz. Weisman had eliminated Chris Brewer in seventh place ($49,000) to bring day 1 to a close.

The first knockout on day 2 saw short stack Isaac Kempton get the majority of his stack in preflop with A-K-5-3 and ace-high hearts, three-betting the small-blind raise of Weisman from the big blind. Weisman called with K-10-9-7 with three clubs and the flop came down A-8-7 rainbow. Weisman bet enough to put Kempton all-in, having flopped a pair and an open-ended straight draw. Kempton called with top pair and had plenty of cards to fade. Weisman picked up a back door flush draw on the turn, giving him 22 outs heading into the river. A third club completed the board and Weisman made a flush to lock up the pot. Kempton, who finished as the runner-up in both the Wynn Millions main event and the $15,000 PLO event at this series, earned $73,500 for his latest deep run. He is the current leader in the PGT points race, and sits in third place in the 2022 POY standings.

2019 WSOP $25,000 pot-limit Omaha event winner Stephen Chidwick. was the next to fall. Chidwick was the clear short stack at one point during six-handed action, and then battled all the way back into second place during five-handed play. He then lost a massive pot against Weisman, who made a backdoor flush again to leave Chidwick with just ten big blinds. Chidwick soon was all-in with top pair on a queen-high flop, only to find himself in rough shape against the queens and sixes of Weisman. The turn and river were of no help to Chidwick and the 2019 POY award winner was eliminated in fifth place ($98,000). He now has more than $38.6 million in career tournament earnings to his name, the sixth most of any player in poker history.

Weisman had nearly four times as many chips as the next-largest stack after Chidwick hit the rail. It took less than an hour to convert that lead into the title, with a pair of player breaks included. Matthew Wantman got all-in with top two pair facing the top pair of Weisman. The turn gave Wantman queens full of sevens, leaving Weisman in need of a nine on the river. The 9Heart Suit rolled off the deck, giving Weisman a higher full house and eliminating Wantman in fourth place. The World Poker Tour Aria Summer Championship main event winner earned $134,750 for his strong showing in this event.

Reigning Card Player and PGT Player of the Year Ali Imsirovic got all-in with top pair on a king-high flop. He was up against the top pair, top kicker of Weisman, which held up through the turn and river. Imsirovic took home $183,750 for his 11th final-table finish of the year. With four titles and nearly $1.7 million in year-to-date POY earnings, Imsirovic has climbed into second place in the 2022 POY standings and third place on the PGT leaderboard, setting him up nicely for a run at back-to-back victories in those points races.

Weisman took more than a 2:1 chip lead into heads-up play with Cary Katz, who had chipped up during three-handed action. The final showdown didn’t last long. On the first hand, Weisman raised from the button with AClub Suit8Club Suit5Heart Suit5Diamond Suit and Katz defended his big blind with QDiamond SuitJSpade Suit3Spade Suit3Diamond Suit. The flop came down JHeart Suit5Spade Suit2Diamond Suit and Katz checked with top pair. Weisman bet small and Katz called. The QClub Suit on the turn gave Katz queens and jacks. He checked again and Weisman bet the pot. Katz re-potted and Weisman got it all in. Katz called and found himself in need of a queen or jack on the river. The AHeart Suit on the end secured the pot and the title for Weisman, while Katz earned $269,500 as the runner-up. This score increased Katz’s lifetime tournament earnings to nearly $34.6 million, good for ninth on the all-time money list. He also earned enough rankings points land inside the top 10 in both the Card Player and PGT points races.