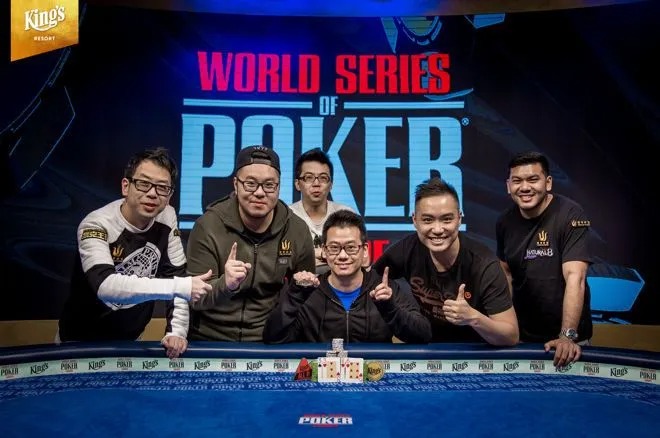 Tsang got off to a strong start in this event, finishing day 1 as the overall chip leader. The Hong Kong native entered the eight-handed final table in second chip position behind Russia’s Ilya Bulychev. The two leaders traded bustouts early on at the final table, before Quan Zhou and Jason Grey scored knockouts of their own to close the gap somewhat on the two leaders.

Tsang then went on a tear, busting Zhou in fourth place ($32,315 USD) and Jason Gray in third place ($45,434 USD) to take enter heads-up play with just over 60 percent of the chips in play. He was able to stretch his lead over Bulychev to a 3.5-to-1 advantage by the time the final hand arose.

With blinds of 40,000-80,000 Tsang raised to 210,000 from the button with the KHeart Suit6Heart Suit3Heart Suit3Spade Suit. Bulychev made the call holding the AClub Suit7Club Suit5Club Suit2Club Suit. The flop came down 6Spade Suit4Heart Suit3Diamond Suit to give Bulychev the nut straight and Tsang a set. Bulychevchecked to Tsang, who bet 180,000. Bulychev check-raised the size of the pot and Tsang moved all-in from there. Bulychev called and the turn brought the AHeart Suit, giving Tsang a flush draw to go with his full house and quad outs. The river was the QHeart Suit, completing Tsang’s flush to secure him the pot and the title. Bulychev was sent home in second place, earning $65,186 USD for his deep run.

PokerStars Strikes Back at Rival with Spin & Go Monte Carlo...