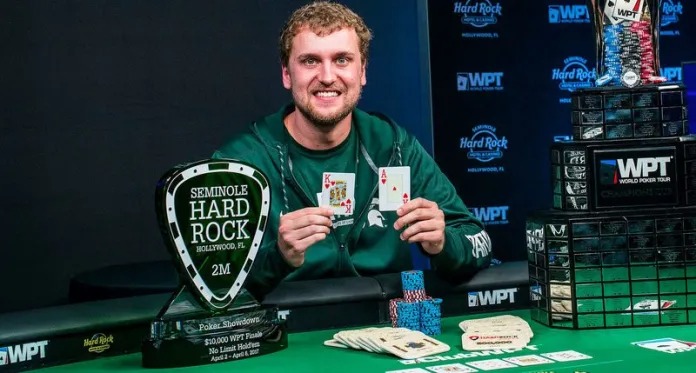 The event took place on Monday at the host venue. As mentioned above, it drew 91 entrants who created a prize pool of $873,600 to absolutely smash the $500,000 guarantee. The event’s structure provided for fast and furious action at the poker tables. It featured 30-minute levels this year, a change from previous editions of the Seminole Hard Rock Poker Open festival. The top 12 finishers received a share of the money, with min-cashes kicking off from $21,857.

Poker pro Aaron Mermelstein was the unfortunate bubble boy to bust out in 13th place. He was followed by James Calderaro whose twelfth-place finish secured him with the first payout of the tournament.

Notables who failed to make it into the money included Elio Fox, who topped the field of the SHRPO $50,000 Super High Roller just a couple of days ago, and WPT champ James Romero. Stephen Chidwick, Barry Hutter, and Ben Yu were among the tournament regulars to cash from the One-Day event, but failed to claim the title. The short levels allowed players to reach the final stages of the tournament quite quickly. It was not that long before Riess and Ray Qartomy were the last two players left in contention. Riess was the chip leader ahead of heads-up. He came on top the chip counts chart late into play to never look back. As for Qartomy, it can be said that he controlled action throughout the greater portion of the final table.

Instead of squaring off for the title, the two remaining finalists decided to strike a deal and split what had left of the prize pool based on their chip counts. Riess was thus crowned the tournament’s champion and collected the lion’s share of the prize pool, good for $236,838, while Qartomy scooped a $206,297 for his runner-up finish.

Despite his numerous successes on the live tournament felt, Riess is still best known for capturing the most coveted poker title on the planet – the WSOP Championship. The player won the Main Event in 2013 to collect a first-place prize of $8,361,570. Including his latest live tournament cash, Riess now has more than $12.2 million in live tournament earnings.