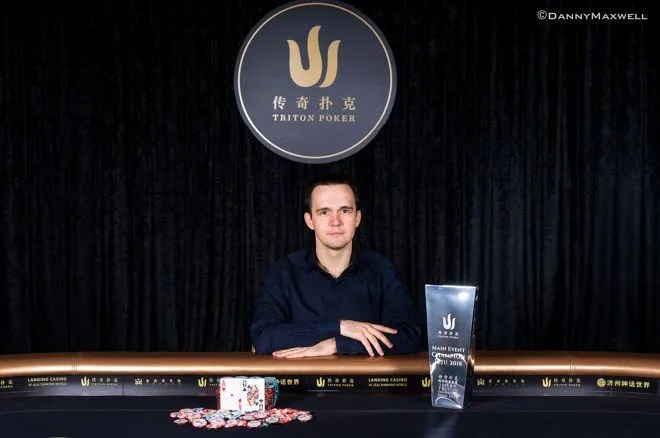 This was Badziakouski’s third title and sixth final table finish of 2018, bringing his year-to-date live tournament earnings to more than $10.5 million USD. The 600 Card Player Player of the Year points he earned as the champion of this event were enough to see him climb into 25th place on the overall POY leaderboard with 2,916 total points.

Badziakouski scored his first knockout at the final table of this event when he moved all in holding the AClub Suit7Club Suit on a 5Spade Suit4Club Suit3Club Suit flop. American poker pro Jason Koon made the call with the ADiamond Suit6Diamond Suit. The turn was the QDiamond Suit and the river the 5Heart Suit, and Badziakouski’s seven kicker played to earn him the pot. Koon took home $8,470,000 HKD ($1,079,042 USD) and 250 POY points as the fifth-place finisher. This was his 12th final table finish of the year, and with three titles and $11,238,518 in earnings so far in 2018, he has climbed to fourth place in the Player of the Year standings.

With that Badziakouski took a big lead heading into four-handed action. He then knockout out Sam Greenwood in fourth place ($11,550,000 HKD/$1,471,421 USD) to extend his advantage even further. Not long after that Richard Yong got his last chips in with ASpade SuitQClub Suit against Badziakouski’s AClub SuitKDiamond Suit. Both players paired their ace on the flop, but in the end the king kicker played and Yong was eliminated in third place with $16,720,000 HKD ($2,130,058 USD).

Chan Wai Leong had survived to heads-up play, but would begin at roughly a 5-to-1 chip disadvantage to Badziakouski. In the end the final hand came down to a classic preflop coinflip situation, with the short-stack shoving with the 6Heart Suit6Club Suit and Badziakouski calling with the AHeart SuitQClub Suit. The board ran out ADiamond Suit10Heart Suit7Diamond Suit5Spade Suit2Spade Suit and Badziakouski paired his ace to earn the pot and the title. Chan earned $25,520,000 HKD ($3,251,141 USD) as the runner-up finisher.

Check out a video of the final hand of the tournament below: