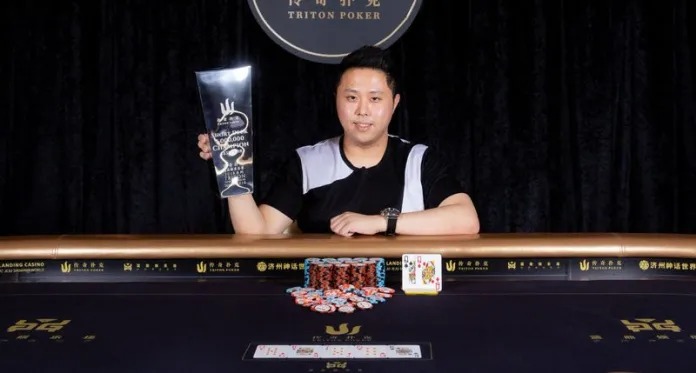 On July 25th Kenneth Kee finished as the runner-up in the first event of the 2018 Triton Poker High Roller Series Jeju, losing heads-up to Nick Schulman in the $100,000 HKD shot-deck no-limit hold’em event. Less than a week later Kee found himself heads-up again, this time facing Cary Katz for the $1,000,000 HKD no-limit hold’em short-deck title. The second time was the charm for Kee, who emerged victorious to win the massive first-place prize of $22,500,000 HKD ($2,925,000 USD).

Kee overcame a field of 60 entries in this event, which cost around $127,000 USD to enter. Kee knocked out Ivan Leow, who won the $500,000 HKD short deck event just days earlier, sending the Malaysian home in sixth place with $460,200 USD. He then scored a double knockout, picking up the ASpade SuitADiamond Suit and getting involved in a three-way all-in, with Mikita Badziakouski holding the KDiamond SuitKClub Suit and Peter Jetten the QDiamond SuitQClub Suit. Kee’s hand held up and he sent Badziakouski (5th – $600,600) and Jetten (4th – $819,000)to the rail.

Kee kept his streak alive by busting Richard Yong in third place ($1,185,600) to take more than a 3-to-1 lead into heads-up play with Katz. The American ultimately moved the last of his chips in from the button with the JDiamond Suit10Spade Suit and found himself quickly called by Kee’s QSpade SuitQDiamond Suit. The board ran out KDiamond Suit9Diamond Suit7Diamond Suit6Heart SuitKSpade Suit, eliminating Katz in second place ($1,809,600 USD).