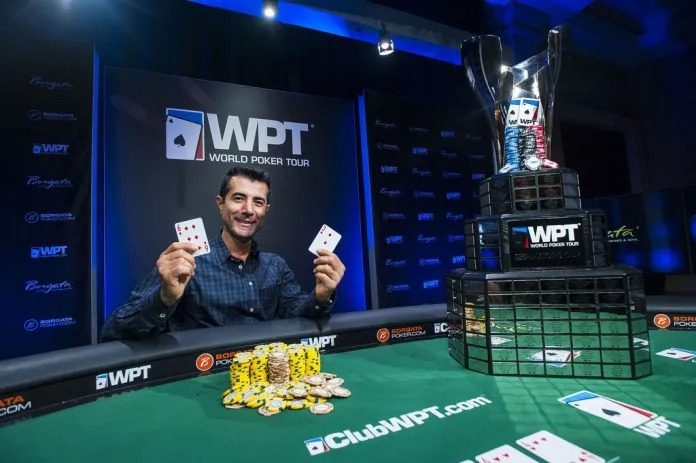 The WPT champions club has a brand-new member and his name is Erkut Yilmaz, a player from Sacramento, California. Yilmaz topped the field of this year’s WPT Borgata Poker Open $3,500 Main Event for a first-place cash prize of $575,112 after putting up a great show in the final stages of the tournament.

The final day of the Main Event was played on Friday at the host venue, Atlantic City’s Borgata Casino. Six survivors returned to play down to a champion. It was namely Yilmaz who led the pack of six with a massive chip advantage over everyone else left. The player had a total of 21.575 million in chips at the start of final day action, good for 144 big blinds and well ahead of his nearest competitor. Oleg Schnaider was that nearest competitor with 7.75 million/52 big blinds.

A long playdown period on the previous day, when players had to whittle down the field to the final six, provided for quick action on the final day. Players began falling out in the very early stages of that last day of the race. The first elimination occurred on the 11th hand of play and it did not take long before the heads-up phase was reached. It is important to note that Yilmaz was the player to dominate action throughout the whole final table.

While action during the initial stages of final-day play unfolded quickly, the same cannot really be said about the heads-up duel. Yilmaz played against poker pro TK Miles for the title. The match kicked off with the eventual champ holding the chip lead. However, at one point, Miles managed to outmaneuver his opponent and assume the chip leader status for a short while.

Yilmas quickly regained control over the majority of chips in play and from that stage on, the player never looked back. He weakened his opponent’s stack and defense, until Miles did not have much to fight with.

On what turned out to be the final hand in play, Miles limped from the button and Yilmaz checked. The [5h][4s][3s] flop arrived to see Yilmaz check and Miles bet 800,000. Yilmaz raised with an all in. Miles called for his last 15.8 million.

Miles turned over [Kd][5s] to Yilmaz’s [6d][3d]. The [6h] on the turn and the [4h]on the river sealed it for this year’s Borgata Poker Open Main Event. Miles went out as the runner-up. The player received $383,399 for his efforts and for running so deep into one of the most popular tournaments to be taking place annually.

As mentioned above, Yilmaz collected the lion’s share of the prize pool, good for $575,112. His prize also included a $15,000 seat into the season-ending WPT Tournament of Champions.