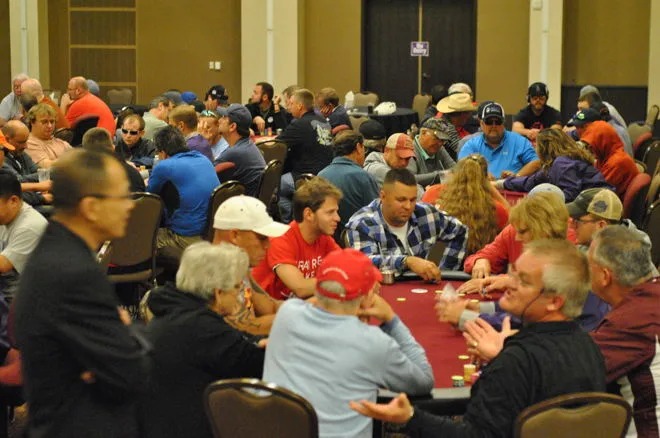 So far, we’ve looked at two hands played by the author in the $1,100 Mid-States Poker Tour Grand Falls Main Event. This week, we’ll take a look at a third and final hand from the same tournament. Spoiler alert — it’s by far the ugliest of the three.

At this point in the event, it was Level 9 (400/800/100), and I had managed to chip up considerably in the previous few levels to a stack of about 70,000, covering most or all of my opponents at my table. I was kicking things into high gear aggression-wise, and I could tell at least a few of my opponents were getting sick of me.

One such player was James Klosterbuer, my opponent in this hand, who had already three-bet me a few times in recent orbits.

It was folded around to me in the cutoff, and after being dealt

I made my standard opening raise to 1,800. Klosterbuer, who had been playing pretty tight, called from the button, and the big blind came along as well.

The big blind checked the

turn. We both checked again on the

for a counterfeited two pair on the flop, and he dragged the pot.

Sometimes when I’m really rolling over my table, I fall into the trap of trying to win every pot, and I think this was an instance where that mentality tripped me up and cost me some chips.

When Klosterbuer called my raise, I actually put him on a fairly tight range as he was playing so few hands, so I was surprised when he came out with a big raise on a

flop. What hands could he have?

Certainly, he could have a flush draw, but since I held the

, that reduced the likelihood of this by quite a bit. Making a big raise if he paired his ten wouldn’t make much sense since I’d probably only continue with overpairs that had him crushed or big draws. I didn’t see many tens in his preflop calling range, anyway. Queen-jack made some sense.

Curious, I decided to peel, and the

was a mighty interesting turn card. Fearing I was now beaten by queen-jack, I checked. To my surprise, he checked back, and another queen arrived.

At this point, I was truly befuddled. Should I barrel out and bluff? I was pretty lost on what kind of hand I was facing, so I checked and ended up losing the showdown.

Thinking the hand over later, I heavily regretted checking the river. There were quite a few hands I could represent there, mainly the nut flush or trip queens since I’d often peel

on that flop, especially with a heart in my hand.

I’d have expected him to bet almost all of his really strong hands on the turn in that spot, not wanting to give a free card to a hand with one heart in it. So two pair or better seemed unlikely, even though two pair is what he ended up having.

I was definitely very surprised to see my opponent turn over

-offsuit, and it just goes to show that when you start opening things up, even tight players are going to follow suit once they get fed up. Usually, identifying such spots is one of my strengths, but I definitely missed the read here.

Continuing on the flop in the face of a big show of strength with a very mediocre hand was also a mistake. My thought process at that point should have been, “He says he has a big hand and I’m out of position, so it’s probably best to just give this up and get to a better spot.”

If I’m going to continue with such a mediocre hand, it’s essential sometimes to win the pot without the best hand when the opportunity presents itself. I may have still been called if I fired on the end, as players often make frustrated calls when good hands get counterfeited, but that was the clear play with the board running out as it did.Source: pokernews.com