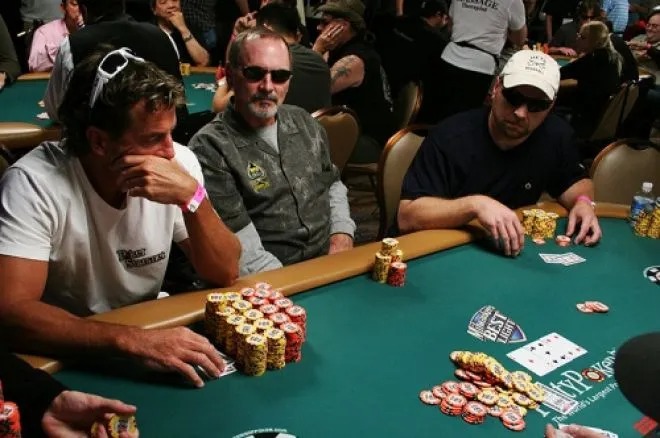 Showing your opponent one of your hole cards during a live hand can be a risky play, and one poker player was reminded of that in an ultra-deepstacked no-limit hold’em cash game held Monday evening at the Bicycle Casino outside Los Angeles.

Video of the hand, posted to Live at the Bike’s Twitter account, began on the river on a board reading ADiamond Suit5Diamond Suit2Club SuitKDiamond Suit4Spade Suit. A player with the nickname “Bitcoin Yoda” bet $10,000 into a pot of $15,000. It was then on Eric Hicks on the button to make a decision.

Remarkably, the stakes in the game were just $5-$5 with a $5 ante, according to LATB. However, the game plays much bigger thanks to the Mississippi straddle.

While Hicks, who made a deep run in this summer’s World Series of Poker main event, was contemplating his move, Bitcoin Yoda offered to show him a card. Hicks picked one, and Bitcoin Yoda flashed him the 3Spade Suit. Hicks now knew he was up against at least the wheel, but possibly a six-high straight. However, it would be hard to imagine 6X3Spade Suit getting to the river.

The table responded to the exposing of the card with incredulity, and Hicks didn’t take long before making it $25,000. Bitcoin Yoda quickly called with 4Club Suit3Spade Suit for a flopped straight. However, he was no good against Hicks’ 7Diamond Suit6Diamond Suit for a flush. Hicks raked in the pot worth 13,000 big blinds.

Bitcoin Yoda was a great sport about it, telling Hicks “nice hand.”

Here’s the video courtesy of LATB:

Sadly, the stream has not started yet but you’re not gonna wanna miss this game tonight.