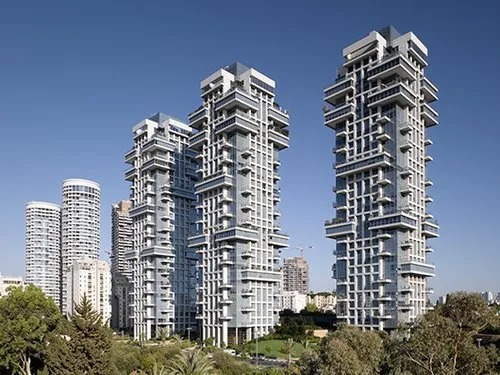 US casino mogul Sheldon Adelson has increased his real estate portfolio with the recent purchase of a penthouse in one of the Akirov Towers in Tel Aviv, local financial news outlet the Globes reports. Mr. Adelson has reportedly paid $40 million for the luxury apartment.

Located on Pinkas Street in Old North Tel Aviv, the Akirov Towers were designed by Moore Yaski Sivan Architects and were built in the 2000s. The three residential towers each feature 34 stories and are nearly identical in height.

According to the Globes, Mr. Adelson bought the penthouse, which occupies the 33rd and 34th floors of the middle tower, in late July for an asking price of $40 million. The Las Vegas casino owner purchased the apartment from the sons of late Israeli business magnate and philanthropist Sammy Ofer. The businessman passed away in 2011.

The luxury penthouse occupies 900 square meters and has a 150-square-meter balcony with a panoramic view of Tel Aviv. The Akirov Towers are among the city’s most popular and coveted addresses. And the recently purchased apartment is not the only unit owned by the Adelson family in the towers. The Globes reports that a separate unit has previously been registered in the name of Mr. Adelson’s wife Miriam Adelson.

With estimated net worth of $35 billion (Forbes: October 5, 2018), Mr. Adelson is one of the world’s richest people. He is the founder, Chairman, and CEO of Las Vegas gaming and hospitality giant Las Vegas Sands. The businessman and his wife are major donors of different Jewish organizations. Most recently, they donated $70 million to Birthright, a program aiming to bring young Jewish adults to Israel on short educational trips.

The Adelsons are not the only high-profile owners of apartments in the locally popular residential towers. Former Israeli Prime Minister Ehud Barak has, too, previously owned a unit in Akirov Towers, which he sold to another gambling boss several years ago.

As reported by local media, it was Playtech founder Teddy Sagi who bought the apartment on the 31sr floor in one of the three towers. The businessman reportedly paid the amount of NIS26.5 million for the unit previously owned by Mr. Barak.

Mr. Sagi actually has quite an impressive real estate portfolio across his homeland. Last spring, he bought two penthouse apartments in the Ritz-Carlton Hotel in Herzliya for NIS32 million. In 2010, he bought a house in the affluent Herliya Pituah beachfront neighborhood for NIS145 million. The businessman also owns a triplex on the 44-46th floors of Tel Aviv’s W Tower, which he has purchased from local real estate developer Moshe Peterburg for NIS19 million.