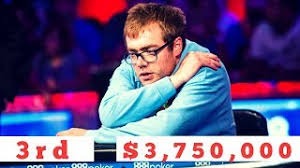 The final table of the 2018 World Series of Poker $10,000 buy-in main event kicked off today, and after nearly five hours of action the field has been narrowed to just six players left from the initial field of 7,874 entries in this event.

The runaway chip leader when play was halted a bit after 10:00 p.m. local time was Michael Dyer. The 32-year-old from Houston, Texas came into the day essentially tied for the chip lead with Nicolas Manion. Dyer established himself as the force to be reckoned with at the final table, and although he did not score any knockouts during the first session at the final table, he was able to chip up to 156,500,000 by the end of the night. Dyer will enter day two of the final table with just shy of 40 percent of the total chips in play, having more than double the chips of his nearest competitor in Manion (72,250,000).

2009 World Series of Poker main event champion Joe Cadasurvived the day, keeping alive hopes of becoming the first player in the modern era of the WSOP to win the main event multiple times. Stu Ungar’s third main event win in 1997 marked the last time a previous world champion came out on top in the WSOP main event. Cada got off to a fantastic start at the final table, chipping up as high as 47,500,000 early on in the day’s action. The 30year-old poker pro and three-time bracelet faltered in a few sizable pots midway through the day, but wound up winning a few key pots in the last orbit to finish up with 29,275,000 for just over 29 big blinds.

Cada is the second shortest stack remaining, with only Aram Zobian bagging up fewer chips. The 23-year-old poker pro will have just shy of 17 big blind when play resumes.

The first elimination at the final table took place just 16 hands into the day. France’s Antoine Labat picked up KHeart SuitKDiamond Suit on the button and raised to 1,200,000. Labat was the shortest stack coming into the final table, having lost roughly 80 percent of his chips in the final hand of day 7 when he and 10th-place finisher Yueqi Zhu both got all-in with what else but pocket kings, only to run into the pocket aces of Nicolas Manion.

The second shortest stack at the table, Artem Metalidi, looked down at the QHeart SuitQClub Suit and moved all-in for 10,300,000. Labat made the call with again with his pocket kings, but this time was ahead going into the flop. The tables quickly turned when Metalidi hit a set on the ASpade SuitQDiamond Suit5Spade Suit flop. The turn was the 9Spade Suit and the river the ADiamond Suit, giving Metalidi a full house and sending Labat home in ninth place. He earned $1,000,000 for his deep run in this event.

Metalidi might have been the one to send Labat packing, but he was still one of the shorter stacks at the final table. He lost a chunk of what he had just won to Cada, and a few orbits later got the last of his chips in with the 5Club Suit5Diamond Suit. Aram Zobian moved all-in with the KDiamond SuitQDiamond Suit and the rest of the competition folded.

The 6Diamond Suit5Heart Suit2Diamond Suit was an action flop, giving Metalidi a set of fives and Zobian a flush draw. The KClub Suit on the turn kept Metalidi ahead, but the 4Diamond Suit on the river complete Zobian’s flush draw. The 29-year-old Ukrainian poker pro was knocked out in eighth place, taking home $1,250,000 for his strong showing. Zobian chipped up to over 32 million after the hand, nearly twice what he came into the day with.

Just ten hands later the third and final elimination of the day took place. Australia’s Alex Lynskey had entered the day in fifth chip position, but he just could not seem to get anything going under the bright lights. In fact, he officially did not win a single hand in his time at the final table. In the end the 28-year-old poker pro from Brisbane moved all-in for just shy of 14.5 big blinds from the big blind facing a raise from Dyer in the cutoff and a call from 2016th WSOP main event 11th-place finisher John Cynn in the small blind. Dyer folded, but Cynn made the call with the KSpade SuitQSpade Suit and found himself in a coin flip situation against Lynskey’s 6Diamond Suit6Club Suit. The board ran out 10Club Suit9Club Suit3Spade Suit10Diamond SuitJClub Suit and Cynn rivered a straight to win the pot and knock out Lynskey in seventh place. With that Cynn further secured his hold on the third-place spot on the leaderboard, while Lynskey hit the rail in seventh place with $1,500,000.

Play continued six-handed until the completion of level 37 before the remaining players counted and bagged up their chips for the night. Action will resume at 5:30 p.m. Pacific, with the final six coming back to increased blinds of 500,000-1,000,000 with an ante of 150,000. Stay tuned to Card Player to find out which of the six remaining players will become poker’s newest world champion.

Here is a look at the chip counts of the final six players: