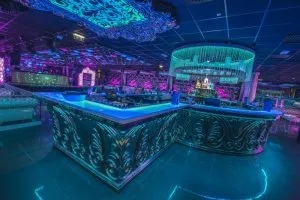 It has been action-packed two days at Casino Vilamoura in Southern Portugal where this year’s edition of the WPTDeepStacks Portugal Main Event is taking place. The final of the tournament’s three starting flights was completed at the host venue late last night and we now know that its overall field was comprised of more than 200 entries.

The Main Event featured a total of three starting flights, played over two days. Days 1B and 1C, the latter one featuring a turbo format, were played yesterday. Following more than ten hours of poker action at Casino Vilamoura, it was Peter Giordano who scooped the largest stack of the two starting flights. Bagging 375,000, Giordano will also enter Day 2 of the tournament as the overall chip leader and a comfortable advantage over the rest who managed to make it through any of the three starting flights.

There will be 81 players who will return for Day 2 action, the survivors from the previous two playing days. Play is set to resume at 2 pm local time, which means that the start of the new day is just minutes away from now.

Who Else Made It Into Day 2

A look at the chip counts chart tells us that Tarej Bouchama with 225,000 and Angello Falletta wih 201,000 were the other two players to find a spot into top three of the temporary chip counts chart and to bag big for the night.

The 2017 WPTDeepStacks Portugal Main Event champ, Francisco Lopes, was too among the players to make it through the initial stage of action and into Day 2 of play. Lopes emerged victorious over a field of 250 entries last year at the same host venue to scoop a first-place prize of €57,060 and the tournament trophy. This year, the player is ready to fight for a back-to-back title. He entered the tournament on Day 1A, but got busted in the final level of action. As it can be seen, his run yesterday was much more successful as he managed to lock a coveted spot into the second day of play.

There is one more former WPTDeepStacks champion still in contention. Rex Clinkscales emerged as the chip leader of Day 1C with 92,000. The player is vying for his second title from the popular series after taking down the WPTDeepStacks Tampa Main Event at Seminole Hard Rock Hotel and Casino Tampa in June 2017. The player collected a nice payout of $162,354 for his triumph back then.

It is yet to be announced how much the winner of the Portugal Main Event will scoop for remaining the last surviving contender. Organizers are set to announce the final prize pool and the places paid later today. The money bubble is expected to burst at some point during Day 2 action and the field will be whittled down to just a few players who will advance into the final Day 3, which will be played tomorrow at the host casino.