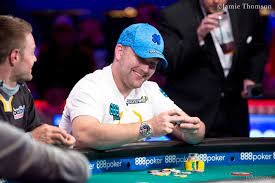 Day 7 of the 2018 World Series of Poker Main Event – $10,000 No-Limit Hold’em World Championship has concluded with the official creation of the Main Event’s final table of nine players. Leading the way, courtesy of a huge pot and near double-knockout in the night’s last hand is a relative poker unknown in Nicolas Manion, a Michigan native who will find himself, on Friday, on the biggest poker stage of all.

The night’s action also saw the return to the Main Event final table of 2009 champion Joe Cada, who will seek to become the first two-time Main Event winner since Johnny Chan accomplished the feat in 1987 and 1988.

Manion (pictured at right), a 35-year-old small-stakes, online-poker grinder from Muskegon, MI, rode a huge cooler hand to a pot of more than 112 million chips that gave him the lead as action ended. Manion’s single-hand haul put him just ahead of Houston, TX’s Michael Dyer, who dominated most of Day 7 play and was far ahead of the pack before the night’s final stunning hand. Dyer bagged 109,175,000 in chips, far ahead of third-place Tony Miles’ 42,750,000.

Manion’s huge hand knocked the return to the final nine of fellow Michigander Cada to a time-sharing theme, and it occurred without warning. Ten players remained at a single unofficial final table, awaiting one more knockout to set the official nine. The night’s last hand began with Manion opening the betting to 1.5 million, France’s Antoine Labat called, and one of the shorter stacks at the table, China-born pro Yueqi “Rich” Zhu, moved all in for 24.7 million. Action folded around to Manion, who then moved all-in for more than 43 million in total. That left it up to Labat, who pondered for some time before moving all in as well.

The cards were turned up to show the cooler: Manion had , while Zhu had and Labat had . Zhu’s hand, backed by the shortest of the three stacks, was dead to anything but a king-high straight (and a probable chop at that), while Labat had some small chances to catch a four-flush as well. Neither of the pocket kings, came close, however, as the board ran out . That sent Zhu to the rail, bubbling the official final, while Labat did make the final but will return tomorrow as the short stack, with just over eight million in chips.

Despite the big lead enjoyed by Manion and Dyer, however, plenty of attention will be paid to 2009 champ Cada, who will return on Thursday to a sixth-place stack of 23.675 million. Cada famously came back from the brink of elimination to win that 2009 Main Event, and with three bracelets and over $10.3 million in lifetime WSOP earnings, he’ll be the star attraction for Friday’s Day 8.

“Oh, my gosh,” said Cada, referring to the night’s stunning conclusion. “I thought the thing was going to go all night. Everyone here was playing great poker; everyone was awesome, and no one was going to give any chips up. You needed something like that to burst this bubble.

“It was a lot more of a grind this time,” added Cada, comparing this to his 2009 run. “I respect the tournament more, I knew it was a long, long eight days here, and I felt like I had room to come back. I had 9K at one point in this tournament, and I was grinding a short stack. I had one-fifth average [chip stack] for almost this entire tournament. I had to pick my spots, shove on people who were raising too much, and try to pick up some hands.” That strategy worked out well for Cada this week, tough grind though it was.

As for his thoughts about repeating as Main Event champ, Cada simply said, “We’ll see, we’ll see how it goes.”

Also making the final nine and sharing his thoughts was Indianapolis, IN’s John Cynn. Cynn came oh-so-close to making the Main Event final nine just two years ago, when he finished 11th for $650,000. Cynn was perhaps exhausted after the final-table bubble tension. “To be honest,” he said, “more than anything, I’m kind of glad the bubble popped and the day’s ending. … It’s definitely surreal. I don’t know if it’s hit any of us yet; it’s been a really long day.

Day 7 began with 26 players still in the hunt for the Main Event’s $8.8 million first prize. Cranston, RI’s Aram Zobian led to start the day with about 41.6 million in chips, though he found it a tougher battle than on Day 6. Zobian did hang on to make the final, in seventh place with a relative short stack of 18,875,000 million, despite his struggles.

Meanwhile, others fell at a rapid pace. Day 4 leader Barry Hutter busted in 25th not long after play began, with Belgium’s Bart Lybaert, who led for much of Day 6, right behind. One of the most well-known pros in the final 26, Eric “Efro” Froehlich, exited in 23rd. Argentina’s Ivan Luca (20th) and France’s Sylvain Loosli (18th) had short Day 7 runs as well. The exodus slowed somewhat as the final table neared, and when Omaha, NE’s Ryan Phan busted in 11th, it set the stage for that official final-table bubble. Three tense hours later the cooler hand arrived, ending with Zhu’s exit and Manion’s instantaneous climb to the top of the leaderboard.