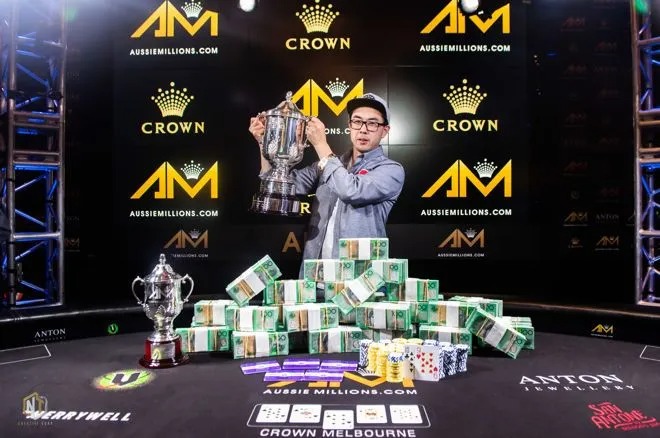 The 2020 Aussie Millions $10,600 AUD no-limit hold’em main event attracted a field of 820 total entries, falling just three entries short of breaking the event’s attendance record which was set in 2019. The massive turnout built a prize pool equivalent to more than $5.6 million USD. In the end, Melbourne resident Vincent Wan emerged victorious with the title, earning $909,420 USD for the win.

“I’m lost for words. I’m just tripping out at the moment. I was just wanting to min-cash at one point so I’m struggling; I’m just delirious at the moment,” Wan said when interviewed by Aussie Millions Tournament Director Joel Williams after securing the title. “I can’t believe my luck. Thank you to all the other players. Basically it’s ten years of my life just grinding and working and trying to get here. I can’t believe I did it.”

In addition to the title and the money, Wan was also awarded 2,280 Card Player Player of the Year points as the champion of this event. The massive victory was enough to see Wan surge into the outright lead in the 2020 POY race standings, which are sponsored by Global Poker.

Wan came into the final day of this event in third chip position with seven players remaining. Wan was just one big blind ahead of eight-time World Series of Poker bracelet winner and Poker Hall of Famer Erik Seidel when play resumed. Seidel was looking to add to his more than $6.7 million in prior cashes at Crown Melbourne, the site of the Aussie Millions series.

Nicolas Malo was the first player to hit the rail at the final table. He got his last chips in holding 10Diamond Suit8Club Suit on a JClub Suit8Spade Suit9Heart Suit flop. He ran into the QSpade Suit10Heart Suit of Nino Ullmann, whose flopped straight held from there to send Malo home with $165,655 USD.

The next key showdown saw Oliver Weis get all-in with KSpade Suit10Spade Suit, only to receive a call from Gareth Pepper’s ADiamond SuitKClub Suit. Weis was unable to come from behind and settled for $212,396 USD as the sixth-place finisher.

Wan earned his first knockout of the day when he picked up ASpade SuitJClub Suit and raised from the cutoff. Erik Seidel three-bet all-in for 2,875,000 holding AClub Suit10Spade Suit. Wan made the call to put Seidel at risk. Both players flopped their kickers, but Wan’s jacks held from there to eliminate Seidel in fifth place. The $261,275 USD he earned for his latest deep run increased his career earnings to $37.5 million, enough to put him in fourth place on poker’s all-time money list.

Nino Ullmann’s got his chips in good, having flopped two pair with 10Diamond Suit7Spade Suit on a 10Club Suit7Diamond Suit5Heart Suit board to take the lead against the pocket queens of Ngoc Tai Hoang. The two got all the chips in after the JDiamond Suit hit the turn, and Ullmann was in good shape to double up. The 5Diamond Suit on the river counterfeited his two pair, though, ending his run in fourth place ($331,310 USD).

The final three players struck a deal that saw Wan and Hoang lock up $909,420 USD each, which Gareth Pepper secured $690,000 USD as the shorter stack. The three agreed to play out the event to determine who would win the title and the championship bracelet. Gareth Pepper was unable to overcome his chip disadvantage and was ultimately eliminated when his blind shove from the small blind with 9Diamond Suit2Club Suit was called by Wan, who held ADiamond Suit3Spade Suit. Wan made a pair of aces to send Pepper to the rail in third place.

Wan took 13,665,000 into heads up play against Ngoc Hoang, who held 11,045,000. The two battled it out for roughly four hours, bringing the length of the final table to around 15 hours. On the 414th hand of the day, Hoang got the last of his chips in with ASpade Suit3Heart Suit and was called by Wan, who held 10Club Suit9Heart Suit. The board came down JSpade Suit9Spade Suit6Spade SuitJDiamond Suit10Diamond Suit and Wan made the winning two pair to secure the pot and the title. Hoang took home the $909,420 USD he had bargained for.