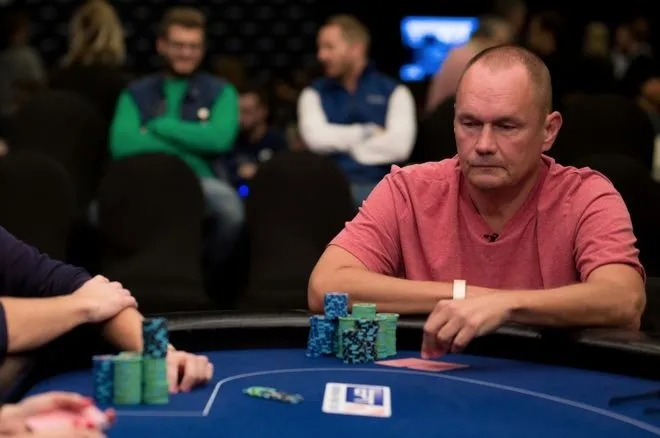 Making a big hand in no-limit hold’em is always fun — particularly when you’re on the turn or river, your hand is reasonably well disguised, and your opponents have already shown an inclination to call your bets, or even bet or raise themselves.

Mats Karlsson enjoyed just such a situation during the latter stage of the European Poker Tour (EPT) Malta Main Event, and as a result was able to carry the chip lead to the final table. Karlsson spoke with our Sasha Salinger about it, and as it happened the hand provided an interesting bet sizing challenge for the Swedish player currently residing in Malta.

As Karlsson explains to Salinger below, the flop came {Q-Spades}{9-Diamonds}{7-Spades}, and even though he’d only made bottom pair he chose an aggressive line after checking and watching Saad continue for 85,000.

“I took a chance to check-raise him,” says Karlsson, “because that’s a flop that usually hits my hand better than his.”

Karlsson made a hefty check-raise to 275,000, and after thinking for a minute Saad called. The {7-Hearts} then happily fell on the turn to give Karlsson trips, and he took his time before betting 350,000. Saad called quickly, bringing the pot up to just over 1.4 million.

The {8-Spades} then comes on the river, giving Karlsson a full house and for all intents and purposes the virtual nuts. Eyeing the 1.1 million or so Saad had behind, Karlsson faced an interesting decision.

It was very similar to the conundrum explored earlier this week by Robert Woolley in his article “‘There is a Figure, an Exact Figure’: The Problem of Value Bet Sizing.”

“I could bet a normal [amount like] 550,000,” says Karlsson, an amount representing about half of what Saad had behind. But he also knew that would show Saad that he himself was committing most of his stack, thus causing him to decide to bet less to make it more enticing for Saad to call.

Additionally — a smaller bet might also have produced an even better result.

“I thought 250 would look pretty weak, so he might do something stupid,” says Karlsson with a grin, indicating his hope perhaps Saad might raise him.

Listen to Karlsson’s street-by-street explanation and hear how the hand turned out:

Note also what Karlsson says near the end about the chance he took by check-raising on the flop.

“That goes to show, when you take a chance once in a while, the cards usually cooperate a bit more than if you play passively.”

While Saad would recover to finish fourth and earn €141,780, Karlsson would get all of the way to runner-up to cash for €261,730, with Aliaksei Boika ultimately earning the title.