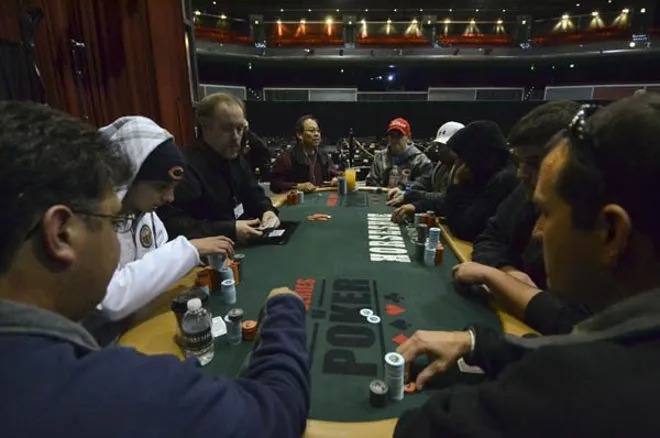 After a couple of weeks off, we’re back with what will likely be the final hand I cover from my abbreviated turn in the $1,675 buy-in World Series of Poker Circuit Horseshoe Hammond Main Event. Memories from the event are fading, and that’s probably a good thing, but I recorded this one for later use.

At this point, it was very early on Day 1b of the event and I was firing my second bullet. I was a little above the 20,000-chip starting stack, but hadn’t shown down anything too crazy. My main opponent in this hand was one of the splashier players at the table, entering lots of pots and calling raises pretty liberally. He had about the starting stack.

With the blinds 75/150, I opened to 400 from an early position with {q-Clubs}{j-Hearts} and got calls from a middle-position player, the button, and both blinds.

Queen-jack offsuit is not a hand I’m usually looking to play from early position at a tough table, but I felt I had a pretty good handle on a soft table here so I was opening up a bit and trying to play more pots than usual.

The wisdom of firing a continuation bet into a crowd of four opponents can certainly be debated, but this is a spot where I like doing it some percentage of the time. Betting your strong hands is almost a must on a flop with this many draws against weaker, more passive opponents, and I’ve noticed players usually play their hands pretty straightforwardly early in these tournaments, not wanting to punt off stacks.

The small blind’s check-raise seems a bit strange, mainly because of the sizing. He’s offering me excellent odds to continue since it’s another 1,400 into a pot of 5,600. There are a lot of draws, so that doesn’t really make sense if he’s saying he has a big but vulnerable hand like {9-}{8-} or a strong top pair. I’m certainly not folding with position and outs in the form of a straight draw and a backdoor flush draw.

After the {7-Clubs} turn my opponent makes a large-ish bet of 5,500. I certainly can’t call any more, but I feel like I have a clear opportunity to take away the pot with a shove.

Since he has about 10,000 back, he still has a very playable stack if he folds, and the size of the shove isn’t so large as to look suspicious. Plus, shouldn’t he usually be checking a lot of his hands on that turn? I could certainly have jack-ten suited or a flush, while he can’t really ever have jack-ten given his flop sizing. Most of his other hands should be folding, and with a player this splashy, I could see him having a wide variety of stuff like ten-nine with which he wanted to “take control of the pot” on the flop.

Lastly, there’s very little chance I’m drawing dead since I have outs against everything but the nut flush. And why would he bet 80 percent of the pot with that hand? If he has anything else, I’m drawing live in case I’m called by something like two pair or a stubborn {k-}{j-Clubs}.

In the end, I was able to get a fold and pick up a huge pot for that early in the tournament without showing a hand down.

Conventional wisdom says to avoid these spots by playing tighter and avoiding possible spew situations early on, and checking the flop here would be the standard line I’d usually take. But I think it’s good to get creative every now and then early to avoid being too predictable, and it can be a huge boost if you can find the right spot.

Protecting Your Stack vs. Maximizing Value