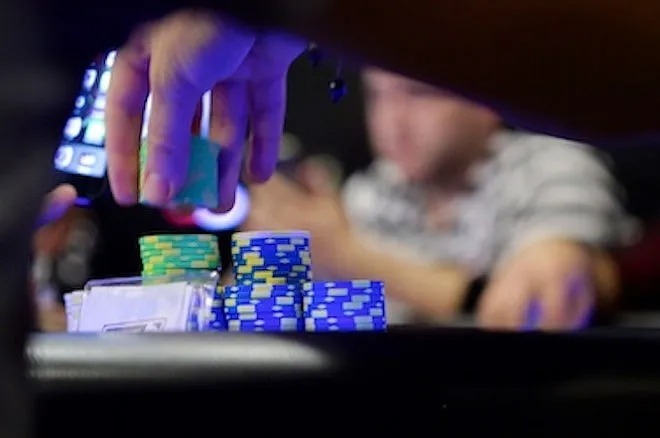 Recently I was in the early stages of a small stakes online tournament. The blinds were 50/100, I had 11,640 and in the following hand I had the villain slightly covered.

Villain, the most aggressive player at the table, opened to 300 from middle position. Sitting two seats to his left, I decided to three-bet him to 777 with {A-Hearts}{K-Diamonds}. Action folded back around to him and he called.

I believed that this player was even wider and more aggressive than average. I figured he could have a few more flush draws as well as the three non-club open-ended straight draws with {9-}{8-}-suited. But for the sake of analysis, let’s stick with the tighter range I gave initially.

I decided to call, putting a total of 8,520 in the middle with effective stacks of 6,185 behind. Here is where things got interesting.

The turn was the {4-Spades}, a seeming brick. Had villain shoved, I would have needed about 30 percent equity to call. Against the tighter range, I’d have about 39 percent equity and would have made the call. Interestingly, though, villain decided to bet half-pot instead of making the standard play of shoving his remaining stack for a little more than 70 percent of the pot.

This departure from what I expected him to do with his range forced me to consider which hands he would choose not to shove. I figured that most aggressive players in small stakes tournaments would just shove here with their draws. If I was correct and villain fit this Bayesian model, then his decision not to shove removed the draws from his range — leaving only a value range that had me in bad shape.

Against two pair or better, I only had about 3.5 percent equity. Even if he’d also play all his {A-}{K-} hands this way, I’d only have about 21 percent equity. He bet half-pot which meant I needed to be good 25 percent of the time for the call to break even. According to my math, this made the turn a fold in my opinion.

I discussed this hand with several of my friends who are better players. They generally said you can’t put in such a large percentage of your stack with a hand this strong and then fold. Additionally, they said that you can’t remove the draws from villain’s range on the turn simply because he did not shove.

This is where I disagreed. This was a small stakes tournament. How often have you seen an aggressive player in these games not shove this turn with flush draws? I posed this question to my friends and very few of them could recall ever seeing a half-pot bet here with a flush draw. In fact, many of them admitted that they themselves would shove their draws here.

I am convinced that most players in small stakes games aren’t balanced and make the mistake of splitting their ranges in spots like this one which allows us to play perfectly against them if we are aware of it. From my calculations, the math seems to back me up.

That said, the math is only as good as the assumptions and inputs. In this case, I believe that the math shows I should have made an exploitative fold on the turn given that villain decided to bet half-pot when he could have comfortably shoved.

Unfortunately, I had not studied this spot beforehand and missed the opportunity to get away from his {A-Spades}{7-Spades}. Hopefully by using math to study these “standard cooler” spots, I can play better against unbalanced small stakes players in the future.