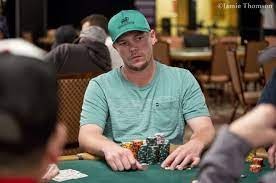 A busy Day 4 in the 2018 World Series of Poker Main Event has seen the field slashed to its final 310 players, each still in the hunt for this year’s $8.8 million first prize. Leading the way into Monday’s Day 5 is Sarasota, Florida’sBarry Hutter, shown at right, who bagged an impressive 5,597,000 in chips after the day’s 11 hours of play.

Hutter was in or near the lead throughout the second half of Day 4’s play, and he closed the day’s final half-level in strong fashion while being the first player to top five million in chips. Hutter previously won a WSOP bracelet in a $1,500 no-limit hold’em shootout in 2015, and also collected a Circuit ring back in 2010.

Minkin spoke briefly with the WSOP about her Day 4 surge, in between posting updates to her sizable fan base on social media. Asshe told the WSOP, “I’ve just been hyper-focused. Other than for a few mistakes I made earlier in the day, I feel like I’ve been playing really well. When faced with aggression, I’ve been able to make the tough call.”

That was a reference to one of the biggest hands of the entire Day 4, when Minkin made a river call with just middle pair in a pot that ended up holding nearly two million in chips. In Minkin’s own words: “Leading up to that, this player had made a few really aggressive lines with other players, betting three times the pot and shoving rivers. I knew that if I was going to be in a hand with him, it could be potentially for all of the effective stack sizes, which was roughly 900,000 [each].

“Prior to even seeing a flop, I knew that – and was prepared to – play for his entire stack. When I flopped second pair and he was barreling into me, I just made a decision to… call.” The hand put Minkin among the leaders, where she remained at the end of the night’s play.

Yet Minkin was doing more than just making the hero call; she was making herself a seat to be reckoned with. As she raked in a pot during the evening’s play, one of her tablemates remarked to another, “You can’t beat her if you don’t play her.”

Minkin commented on that as well. “They’ve seen that I’ve been playing really solid poker, so I don’t blame them for not wanting to get involved in a hand with me.” That lesson was illustrated through the hero call that gave Minkin most of her current stack.

Yet Day 4 for many was a day of survival, just trying to bag some chips in hopes of reaching the larger paydays ahead. There was the largely overlooked tale of Poker Hall of Famer Barbara Enright, who has clawed through four days of play and finished Day 4 with just 275,000 in chips. Enright was the first woman to cash in the Main Event, way back in 1995, when she finished fifth, and she hadn’t cashed in the ME since 2005 before this year.

Enright’s run has been a Das Boot-type survival tale so far, and she bagged one of the shortest Day 4 totals, at 275,000, despite never topping 360,000 during her entire four days of play to date. “It’s a miracle I’m still here,” Enright said. “I’ve been a short stack on all of Day 1, Day 2, Day 3, Day 4. I got as high as 360 [thousand], while others are at three million, four million….” Yet the three-time bracelet winner endured while many others fell.

San Francisco’s Eric Hicks, one of this year’s Main Event’s most entertaining players, endured a wild up-and-down day before busting out late. Hicks built his stack as high as 1.2 million on three different occasions, but crashed out when he had pocket nines, his opponent had 8-7, the flop came 10-8-7, and the chips went in. Hicks found no more help as the board ran out, and he rushed off with his 401st-place cash of $33,305 to play in Event #69, $3,000 Pot-Limit Omaha 6-Handed.

“It was one of the most awesome experiences of my life,” said Hicks, shortly after his bustout. Hicks also commented on the amulet he wore on a thick chain around his neck throughout the event. It was an oversized, wire-wrapped piece of smoky gray quartz with hundreds of fine crystals that glittered in the lights of the Amazon Room. “We bought this in Vegas our first night last year,” Hicks said, referring to his girlfriend and business partner Ashley, who has played some smaller events at the Rio this summer. “I wore it the last time I made a final table at the WSOP. I bought it from a Rastafarian; supposedly it brings you strength and power. He made it and had it around his neck and I bought it from around his neck.”

Whether raking in the chips or not, Hicks remained upbeat as he went off to play more poker. Also rushing off to play in that 6-handed PLO tourney was Event #42 winner Shaun Deeb, though Deeb late-registered while sitting on a 1.5 million stack in the Main Event, then returned to push that stack over two million by night’s end.

All 1,182 players that returned to Main Event action on Day 4 were already guaranteed a minimum $15,000 payday, following last night’s bubble-bursting bustout by Matthhew Hopkins in 1,183rd place. With the bubbleburst, the day began with a wave of bustouts, with more than a third of the field heading to the payout line in the day’s first two levels.

Ivey, the 10-time bracelet winner, had made a strong surge on Day and added more chips to his stack early on Day 4, cresting well over the million-chip mark. However, Ivey crashed quickly and exited roughly halfway through the day’s session. Massachusetts’ Altman collected most of Ivey’s chips, picking off a river jam by Ivey to send the feared pro to the rail.

“Given the spot,” as Altman later related, “I took a relatively short amount of time for the river call, probably 90 to 120 seconds. My hand was just too strong to fold. I thought he was very capable of turning hands like and black tens and black nines into bluffs as well as something with the ace of spades in it. So, I just went with my gut.”

Despite the ouster of Ivey and other prominent players, plenty of star power remains. Just outside the top ten are Shannon Shorr and Brian Yoon, both over three million. A host of big names bagged more than two million, including Benjamin Pollak, James Obst, James Akenhead, and Shaun Deeb, who still had a couple of hours of PLO to play after the Main Event bagged for the night.

This year’s Main Event, the largest in 12 years, offers a $74,015,600 prize pool, with the proverbial lion’s share still to be awarded. A hefty $8.8 million awaits this event’s winner when action concludes on Saturday, July 14.