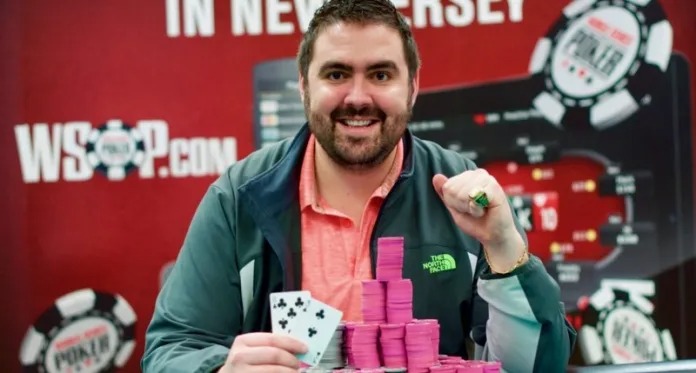 Robert ‘bustinballs’ Kuhn is the latest player to emerge victorious with a 2020 World Series of Poker gold bracelet. The Barnesville, Ohio native defeated a field of 2,091 total entries in the WSOP Online $400 buy-in no-limit hold’em event to earn his first bracelet and the top prize of $115,850. This was Kuhn’s second major live tournament title, having previously won the 2016 WSOP Circuit Harrah’s Atlantic City $1,675 no-limit hold’em main event for $122,098.

When the final table of nine was set, Kuhn held the chip lead with 7,572,410 or the roughly 31.3 million chips in play. Short stack Andrew ‘AndrewFreund’ Fruend was the first to fall when he ran A-8 offsuit into the pocket queens of Max ‘ndirish50’ Huster. Roland ‘prngls12’ Israelashvili followed him to the virtual rail when his 10Heart Suit10Diamond Suit failed to best the QSpade SuitQClub Suit of Kuhn. Israelashvili has now cashed in all three of the WSOP Online events held thus far this summer. He currently sits in fourth place on the all-time leaderboard for career cashes in WSOP bracelet events with 115.

Christopher ‘pokerher2014’ Fuchs got the last of his chips in with AHeart Suit7Heart Suit up against the 9Spade Suit9Club Suit of Theodore ‘klubot’ Lui. Fuchs failed to improve and was knocked out in 7th place ($16,184).

With that Kuhn took roughly a 5:1 chip lead into heads-up play against Ronald ‘rlksaces’ Keren. Over course of the first half-hour of action Keren was able to close the gap and even overtake the chip lead. Kuhn won a big pot with a turned straight to regain control, though, and had re-opened a sizable lead by the time the final hand was dealt. With blinds of 200,000-400,000 and an ante of 50,000, Kuhn raised to 800,000 holding 8Spade Suit8Heart Suit. Keren three-bet to 2,075,000 with the KSpade Suit10Spade Suit. Kuhn moved all-in and Keren called for his last 5,756,210. The ASpade SuitJDiamond Suit7Spade Suit flop gave Keren a flush draw and a straight draw to go along with his overcards, but the 4Club Suit on the turn and the 2Diamond Suit on the river were no help. Kuhn’s pair of eights were enough to secure the pot and the title.