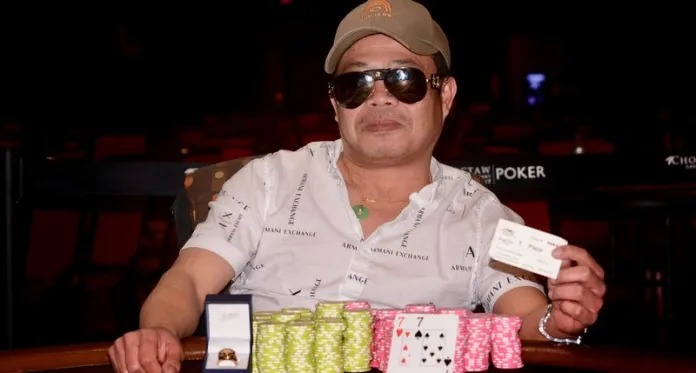 The 2022 World Series of Poker Circuit Choctaw $1,700 buy-in no-limit hold’em main event attracted a sizable field of 1,411 total entries, blowing away the $1 million guarantee to create a final prize pool of $2,137,665. In the end it was Quan Tran who emerged victorious with the title, earning his first WSOP Circuit gold ring and $336,412 in prize money as the champion.

“I feel amazing and overwhelmed at the same time,” Tran told WSOP reporters after his victory. “This was my third Circuit event ever and since the first one it has been a dream of mine to win a ring and become a WSOP Circuit main event winner. It’s a very kind of special to begin this Vietnamese new year off with being able to have my picture hanging from the banner for everyone to see my face.”

In addition to the title and a career-best payday, Tran also secured 960 Card Player Player of the Year points for the win, the most awarded in a single event so far this year. As a result, Tran shot up the standings and into first place in the 2022 POY race.

This event featured two starting flights and then two further days of action. The final day began with just 16 players remaining, with Jessica Vierling in the lead and Tran in second chip position. Tran overtook Vierling for the lead by the time the official final table was set. He further added to that advantage by eliminating Richard Bennett (9th – $36,423).

Raul Garza scored the next knockout, winning a preflop race with pocket sixes besting the A-K of Justin Coliny (8th – $45,595). Rick Alvarado was the next to fall, with his K-J running into the pocket aces of Vierling. Alvarado improved to a pair of jacks, but the overpair held for Vierling and Alvarado hit the rail in seventh place ($57,547).

Jonathan Bennett’s run in this event came to an end when his ASpade Suit5Spade Suit lost a preflop showdown with the KDiamond Suit8Diamond Suit of Nate Steuer, who flopped trips and held from there. Bennet was awarded $73,224 for his sixth-place showing in this event.

The next knockout was the result of a standard coinflip, with Steuer moving all-in with 7Heart Suit7Club Suit and receiving a call from Garza’s AClub SuitKDiamond Suit. A king on the flop gave Garza a lead which he maintained through the river, sending Steuer packing in fifth place ($93,926).

According to Card Player’s poker odds calculator, the next big all-in confrontation that took place result in a chopped pot roughly 97 percent of the time. Hayden Fortini opened and then four-bet shoved with AClub SuitKSpade Suit after Tran three-bet him. Tran called with ADiamond SuitKClub Suit. The flop came down JDiamond Suit6Diamond Suit5Diamond Suit, giving Tran the nut flush draw and a 36 percent chance of scooping the pot. The 2Diamond Suit on the turn completed Tran’s flush, leaving Fortini drawing dead before the river. The QHeart Suit was a mere formality, as Fortini hit the rail with $121,449 for his fourth-place showing.

Vierling slipped to the bottom of the leaderboard during three-handed play. She eventually got all-in on a QSpade Suit4Spade Suit3Heart Suit flop with QHeart Suit8Club Suit, only to find herself in kicker trouble against the QClub Suit9Heart Suit of Tran. The AHeart Suit turn and KHeart Suit river changed nothing, and Vierling was eliminated in third place ($158,286).

Tran took a sizable lead into heads-up play with Raul Garza. On the first hand of heads-up play, Garza limped in from the button with 3Spade Suit3Heart Suit. Tran raised to 1,300,000 from the big blind with 7Spade Suit7Heart Suit and Garza called. The flop came down 10Spade Suit9Diamond Suit2Spade Suit. Tran moved all-in and Garza called. The AClub Suit turn and 8Club Suit river secured the pot and the title for Tran. Garza was awarded $207,927 as the runner-up finisher.