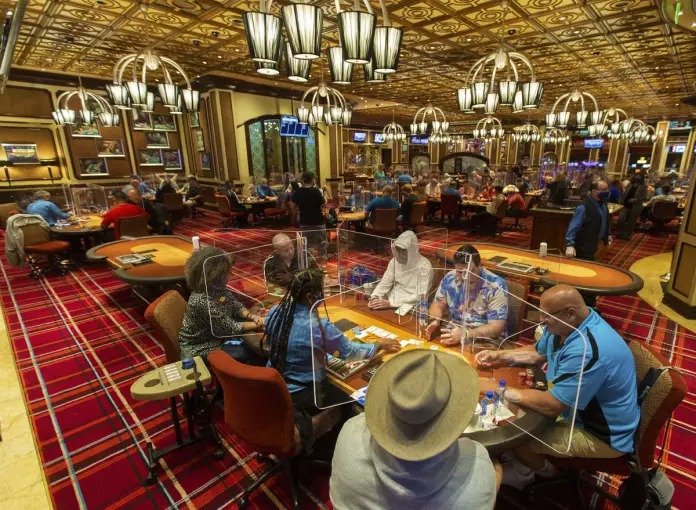 Bellagio’s move to six-handed poker games is leading other rooms in Las Vegas to take measures that will allow them to offer the same. The Las Vegas Review-Journal notes that the use of dividers allows Bellagio to permit one extra player per table over the standard five-handed games now taking place in Nevada, and makes masks optional rather than required.

Garrett Okahara, poker room manager at The Orleans, told the Review-Journal he has ordered dividers and hopes to install them by the end of this week so his room can also offer six-handed poker.

Like the handful of other poker rooms that have reopened, The Orleans has seen big business, with more than 20 games running at times on the weekends. That poker room opened on June 4, as was one of the first in Las Vegas to resume operations.

Although I assumed there would be pent-up demand upon opening, the demand has certainly exceeded my expectations to this point,” Okahara said in an email to the newspaper. “It can only get better with six players, too!

Caesars Palace, which saw double-digit tables running over the weekend, indicates that it will stick with five-handed poker for now, telling the Review-Journal that the room is “getting plenty of business” without dividers, and that “the players are happy.”

The Venetian and Golden Nugget have also not indicated plans to add dividers to allow six-handed poker.

The NGCB announced last week that casinos must require gamblers to wear masks when plexiglass dividers aren’t installed. Before that requirement, visitors reported that the vast majority of casino patrons didn’t wear masks, even though casinos encouraged face coverings.