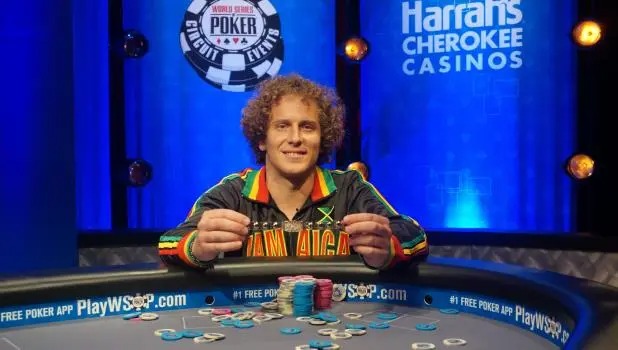 Warren Sheaves was the last player to register for the Global Casino Championship, coming into the tournament late on Day 1 and he would be the last man standing as well.

“That was my strategy,” Sheaves said. “People play poker all day and I’m on vacation every single day of my life.”

And it shows. From start to finish, Sheaves seemed to be having the most fun at the table. He showed up for the final day of play clad in a black, red, yellow, and green Jamaica jump suit, talked and laughed the most, and never seemed deterred despite which way the cards fall. It was something that he said was a part of his game plan, just a part of who he is, and a tool to throw his opponents off.

“A little bit of column A, B, and C,” Sheaves explained. “My personality is to make people happy and I try to exhibit that in my own life.”

Sheaves came into the final day of play as the second shortest of the final six, but he was never deterred. In fact, he felt right at home, in his comfort zone. When it came to his plan, he said he was just planning to “Crush souls,” and “Collect chips.”

“I mean like, 30 bigs for me? That’s my wheelhouse,” he explained. “I could’ve won this tournament with six big blinds.”

He got off to a hot start early in the day, winning a pot early then doubling up through Arkadiy Tsinis when his pocket aces held up against Tsinis’s pocket jacks. And from there, it was all uphill. Tsinis would end up being the 6th place finisher, falling shortly after when he lost a flip to Keven Stammen.

Loni Harwood would be the next to fall when runner-up Jeremy Meacham made a flush on the river and moved all in against her. Harwood would call it off with top two pair, but it was no good and her repeat title chase would be dashed, early in fifth place.

Sheaves would eliminate Armin Stocker shortly after that. Stocker came in the day as a short stack, but some lucky hands allowed him to ladder up two places. The money got in before the flop when Stocker shoved over Sheave’s three-bet and Sheaves quickly called. Sheaves was holding pocket jacks and they would hold up against Stocker’s tens, leaving the tournament three handed.

Sheaves, Stammen and Meacham would play a highly contested battle, with chips moving back and forth and the stacks staying relatively even for a few hours. Keven Stammen was whittled away little by little and eventually he got all the money in against Sheaves in a coinflip situation. Sheave held ace-jack against Stammen’s pocket threes and rivered a flush to bring the tournament into heads up play.

With the two relatively even stacked, Sheaves and Meacham had a heated battled, but for the majority of it, Meacham seemed to be in control. He put tons of pressure on Sheaves by relentlessly check-raising, moving all in multiple times, and a good portion of the match, just by having the goods.

But Sheaves never looked deterred. He was seen singing, joking, smiling, laughing, and just genuinely having a good time at the table. The tournament took a turning point though when Sheaves finally picked off a massive bluff from Meacham.

In the hand, Sheaves opened with a raise to 130,000 and Meacham called. The flop came ace-high and Meacham check-raised a bet from Sheaves. Sheaves called. Both the turn and the river were blank and Meacham bet on both streets, moving all in on the river. Sheaves tanked for a long time, but eventually came to the correct decision – Calling with a pair of fours. Meacham just had jack-high and Sheaves would take a commanding lead while Meacham was left with just over 10 big blinds.

“So I flopped a pair,” Sheaves said about his thought process during the hand. He paused for quite some time, indicating that was his only thought before he eventually added a bit more. “He check-raised the flop and he’s been doing that to me with a flush draw and I’ve been letting him have it, you know? What do they call that? Bait? Bait. I had a five kicker, that thing was huge!

“Yeah, it seemed like a flush draw and I just hoped that he didn’t make a pair of sevens. There’s no way he has a fucking ace. No one has an ace.”

There was a moment during the hand, after Meacham’s flop check-raise, that Sheaves started asking questions. “Do you like fishing?” he asked. “I mean like actual fishing. I go fishing once a year with my dad.” Sheaves said that it wasn’t just a random question, he was digging for information at the same time.

“Well, I thought he was on a flush draw,” Sheaves explained. “I also just wanted to give a shout out to my dad who’s taken great care of me my whole life and we go fishing every year and it’s a beautiful thing. But he was fishin’. He was fishin’.”

It was just one hand after that Meacham would get all the money in. He moved in with queen-high and Sheaves called him down with ace-high. Sheaves paired his ace and that would earn him his first bracelet when it held up. But for Sheaves, this isn’t the bracelet that he wanted to win.

“I feel pretty good,” he admitted. “But they only invited 120 people or so to this tournament. So I just kind of feel like this is a medium bracelet, you know? It doesn’t really fit my ego.”

But it’s not over for Sheaves. He plans to keep grinding, despite achieving this poker goal. He plans to be back on the road tonight on the way to yet another tournament stop.

A full list of results from this event can be found by clicking here. To see live updates from Sheave’s victory, you can click here.