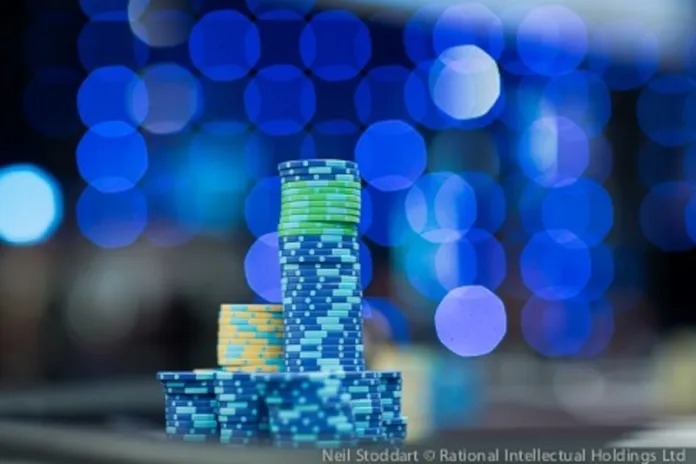 nocz_joker entered this week’s Sunday Million final table with the chip lead and ended in the same position an hour and 45 minutes later.

What sounds like it might have been an inevitable run was actually anything but. Big hands, action boards, and a group of players willing to gamble combined for a final that cruised by in most entertaining fashion. After dropping to within just a few big blinds of elimination, nocz_joker managed to come back, put it all together, and pull off a memorable Sunday Million victory.

The first post-SCOOP Sunday Million of 2018 saw its start time moved up an hour, helping to draw nearly 6,400 entries before late registration closed. nocz_joker spent a fair portion of the latter part of the day with the chip lead, holding it from 12 tables until eight, and then taking it over again with 14 players left and holding it through to the final table.

Germany’s Henk88 was the unlucky player to bubble this week’s final. Henk88 shoved for 5.9 million in the big blind after firgli opened for 520,000 on the button. firgli called with 8♥8♦ and promptly flopped a set. Henk88 turned flush and gutsot draws but never got there, leaving in 10th place while these nine players progressed to fight over the big money:

It didn’t take long for the action to become fatal to the short-stacked players. firgli opened the 13th hand of the final table with A♥J♥ all-in from the small blind and NemesisMsop called for about nine big blinds with K♥J♠ in the big. The board brought no help and NemesisMsop left in ninth.

One orbit later firgli was the lone caller after alpinko opened all-in for 2 million iwth A♠J♦. firgli’s A♥K♣ stayed ahead the whole way and alpinko was out in eighth. The next hand saw Mortan23 open-shove for 792,588 chips in the small blind; nocz_joker called with A♣3♥ in the big blind and flopped two pair to end Mortan23’s tournament in seventh.

Those two knockouts closed out the midnight ET hour. paardman avoided the same fate after returning from the break, winning a flip with A♦T♥ after shoving from the big blind over the top of jackpot875’s opening raise with 7♠7♦. jackpot875 called the shove for about 13 big blinds total but lost out when the T♣ came on the flop and the A♥ joined it on the turn.

Ten minutea after that win, paardman picked up A♠A♣ in the cutoff and raised small to 735,000. mentor1904 check-called all-in for about seven big blinds with K♥Q♠ for top pair and then turned the Q♣ for two pair, kings and queens. The the J♠ cmae on the river, giving paardman aces and jacks and eliminating mentor1904 in sixth.

paardman proved how crazy things could get almost immediately by doubling through nocz_joker with K♣K♥ against Q♠J♦, raising on the button and then calling after nocz_joker check-raised all-in with top pair on a jack-high flop. That win gave paardman 24 million chips and the lead, while nocz_joker dropped to 5.1 million. Then T3G3s opened with K♣K♠ on the button and called when paardman jammed form the big blind with A♣T♣, giving T3G3S the double to 14.8 million. And then nocz_joker doubled back to 14 million through paardman, winning a flip with A♥J♠ against T♥T♣. All that action left paardman, nocz_joker, and T3G3S within four big blinds of each other at the top and jackpot875 and firgli bringing up the rear with 11 and 12 big blinds each, respectively. jackpot875 won a crucial pot after returning to play, topping T3G3S’s K♦Q♥ with A♦Q♠, then lost it all back to nocz_joker two hands later when the latter held K♣K♠ in the small blind and jackpot875 attacked from the button with J♣T♠.

The end of the line came less than 10 minutes later whne jackpot875 jammed with A♣K♥ under the gun. nocz_joker called with K♠J♥, made trips on the 3♠J♠J♦ flop, and knocked jackpot875 out in fifth. firgli went out on the following hand with 6♥6♦ against T3G3S’s A♣T♠ thanks to the A♠ on the flop, ending the night in fourth.

paardman was in a solid second place at that point with more than 20 million chips. Then a call with K♣J♣ in the big blind went wrong when small-blind raiser T3G3S showed down K♠Q♥ and neither player imrpoved on the ten-high board. paardman opened all-in for 12 big blinds two hands later, holding 9♦9♥, but fell in third when nocz_joker’s A♣8♣ paired with the A♠ on the river.

Knocking out paardman gave nocz_joker 41.7 million chips to start the heads-up match, almost double T3G3S’s 22.1 million. An action board turned that around just a few hands in — nocz_joker flopped top two pair with T♣8♠ but was beaten when T3G3S’s J♥7♥ turned a straight.

T3G3S had the lead with 39.5 million chips but nocz_joker got aggressive and won five of the next six pots to trim the deficit to just four big blinds. Another string of six wins in a row moved nocz_joker into the lead for the final hand, which started with T3G3S limping on the button and nocz_joker checking in the big blind. Both players checked the 6♠5♥2♦ flop before nocz_joker check-raised all-in after the 7♣ turn. T3G3S insta-called with 4♥3♣ for a seven-high straight, which left nocz_joker in need of a five or a six to lock up the tournament. The 6♣ on the river delivered the title to nocz_joker.

It was a wild ride but nocz_joker held on when it mattered most. Congratulations to the Czech player on a massive win!