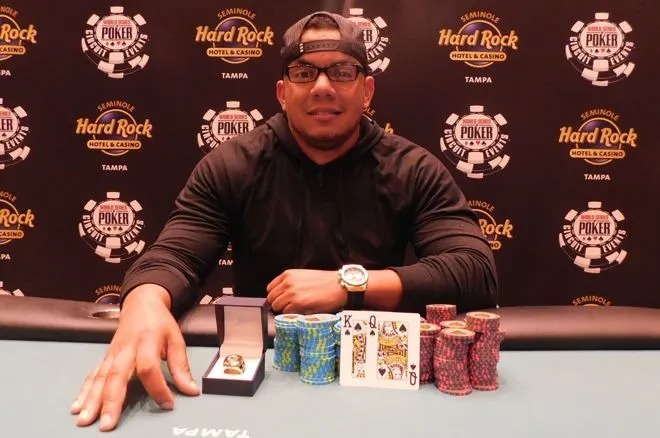 Romeo Mendoza just captured his first World Series of Poker Circuit title after battling through a field of 173 players in the $2,200 No-Limit Hold’em High Roller at the Seminole Hard Rock Tampa. He earned $88,717, his biggest recorded cash to date, for his victory.

The newly crowned champion is mostly a high stakes cash game player and he picked up his first WSOP Circuit victory in his home casino.

“Hopefully it is one of many. It means a lot, specially because I won it here in my hometown. I’ve been playing in this casino since it opened,” Mendoza said after his win.

Day 2 started with 49 players returning to the felt and the 34-year old was near the top of the leaderboard. He kept accumulating more chips, eventually finding himself at the final table with phenomenal players.

When the heads-up match started, Mendoza had a big chip disadvantage and he had to battle it out against a friend of his, three-time Circuit ring winner Andrew “A.J.” Kelsall. Although most players would fear having to defeat such an accomplished player, for Mendoza, it was the opposite.

Indeed, having years of experience playing against him, Mendoza was extremely familiar with Andrew’s game and felt very confident going into the heads-up battle.

“I think he had me three or four times the amount of my chips, but I felt that if me and A.J. got heads up I would win. I kind of know how he plays so I felt really good honestly playing against him. We’ve been playing together for over fifteen years,” he explained.

No matter what would have been the result, for Mendoza, making it to heads-up against his friend was a memorable experience.

“It’s pretty cool that two Tampa guys are here. We’re both hometown guys, we’ve been playing here, and we play high stakes poker all the time together so it’s really cool that it was me and him, we will always remember this because we’re buddies. I know how he plays, he knows how I play, so it was really fun.”

Mendoza intends on taking a shot at the Main Event next.

Ben Diebold was the first casualty of the final table when he ran queens into Kelsall’s kings in all in preflop situation. The board was of no help to him and he was sent out in ninth place.

Short stack Hamid Izadi bowed out shortly after when he shoved pocket threes into Steven Veneziano’s pocket eights. Veneziano improved his hand to a full house and Izadi headed to the exit in eighth place.

William Medina Diaz was Veneziano’s next victim. He moved all in with tens and got called by Veneziano’s king-queen. Veneziano flopped a pair of queens, ending Diaz’s tournament run in seventh place.

Next out in sixth was Miguel Hernandez. After losing multiple pots, he jammed his final crumbs with five-three suited and couldn’t find any help after a call from Kelsall who held ace-queen suited.

James Calderaro headed to the rail in fifth place when he shoved his last few big big blinds with six-five suited only to get snap-called by Veneziano’s aces.

He was followed the payout desk by Steven Veneziano when Veneziano called a shove from Kelsall to put at risk his last chips in a blind vs blind situation. Veneziano was ahead with ace-seven suited against Kelsall’s king-deuce but that didn’t last long as Kelsall flopped a king to take over the lead, eliminating him in fourth place.

Eric Salazar fell in third place when he raised all-in with an open-ended straight draw on the flop against Kelsall’s queens but couldn’t get there.

Although Kelsall started the heads-up match with a significant lead, he lost several pots in a row and fell one spot short from his fourth ring when four-bet shoved with tens and got called by Mendoza’s king-queen suited. The board double paired with aces and jacks and Mendoza’s king played for him to win it all.