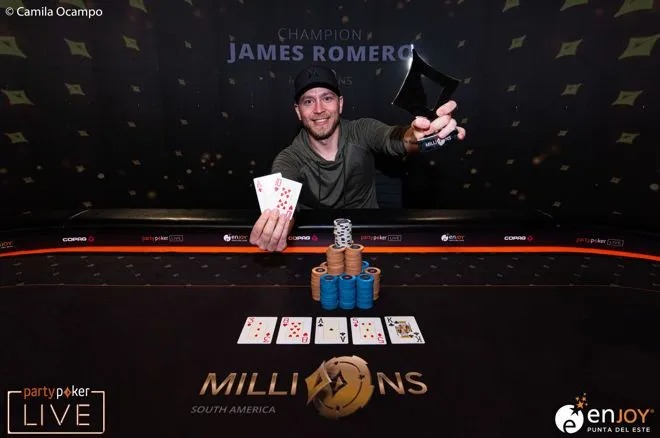 partypoker’s Brazilian pro João Simão ended his challenge short of that octet, while his red diamond site colleague Dzmitry Urbanovich bust first at the final table, at the hands of Jacob Daniels.

That meant a cash for the remaining five players, and Daniels continued his fine run by sending local pro Francisco Benitez to the rails in 5th, with Argentina’s Ivan Luca falling in 4th, before Daniels himself lost two big hands to exit in 3rd, a $150,000 payday for the US pro.

Romero and Mathis were then left to battle heads-up, with Mathis folding to a big river bluff that would have given him the title had he called, though he only held third pair. It would prove to be costly, as shortly afterwards Romero called a big blind shove by Mathis…

…and the PP MILLIONS South America SHR title and $350k was Romero’s to celebrate, Mathis having to settle for the $213,750 runner-up paycheck.

Stars Fight Back Vs Partypoker By Dropping Sunday Million Buy In