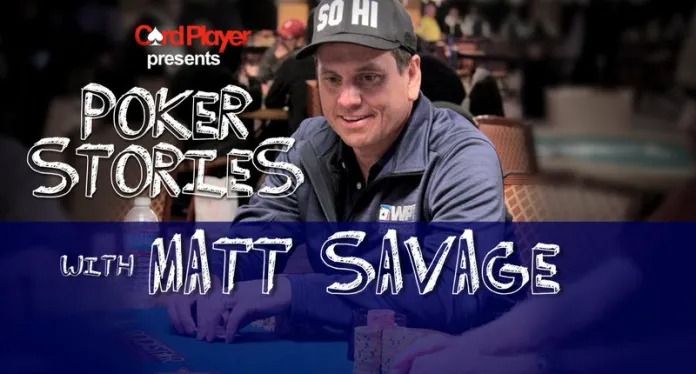 Matt Savage got his start in the poker industry as a chip runner at Garden City Casino, and worked his way up the ranks to dealer at Bay 101, and eventually, tournament director. The San Jose-native saw a need in poker for a standardized set of rules, and with the help of Linda Johnson, Jan Fisher, and Dave Lamb, formed the Tournament Directors Association. Savage was named tournament director for the World Series of Poker when he was just 34 years old, and served in that position during the onset of the poker boom from 2002 to 2004.

In the years since, Savage has continued to work tournaments at his home casino of Bay 101 and also at Commerce Casino in Los Angeles, which is currently hosting the L.A. Poker Classic. He’s also seen his role with the World Poker Tour increase since he was named Executive Tour Director. Savage was heavily featured in the 2007 poker movie Lucky You, and also has a WSOPfinal-table score of his own, finishing fifth in the 2009 $1,500 stud eight-or-better event. He was the inaugural member of the Poker Room Manager’s Hall of Fame, and has been nominated for the Poker Hall of Fame the last few years.

Highlights from this interview include trying to get unplugged, why you don’t need a 16 lb. ball anymore, a disdain for homework, working since 14, going from chip runner to floorman, auditioning at Bay 101, being forced out of the box, the baby faced TD at the WSOP, being proactive with Men Nguyen and John Bonetti, Hellmuth steals the spotlight, how he almost screwed up the infamous Moneymaker/Farha bluff, running out of chips in the main event, proposing to his wife at the final table, how $400,000 went ‘missing’ from the main event prize pool, why he’s the real star of Lucky You, a testy scene with Robert Duval, John Juanda’s grudge, Dick Corpuz: king of the soul read, and why poker needs a museum.