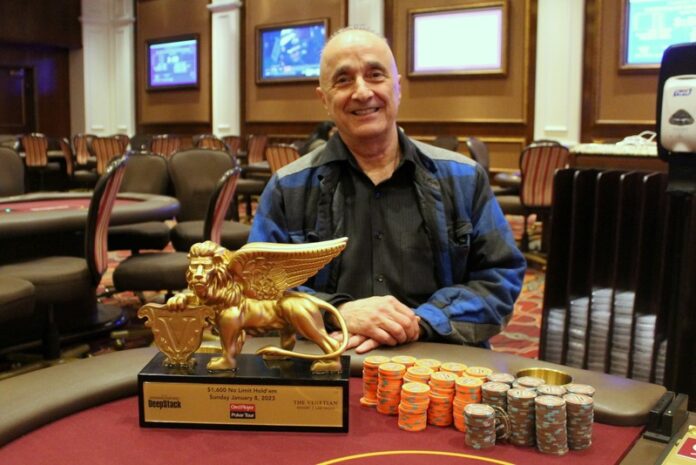 The $1,600 buy-in Card Player Poker Tour main event, part of the Deep Stack Extravaganza series at The Venetian on the Las Vegas Strip, attracted a field of 560 entries. The turnout helped the prize pool easily top the $500,000 guarantee, coming in at $798,000.

The greatest piece of that prize pool went to Reno, Nevada’s Alan Mastic, who banked a personal-best $131,746.

“It was just steady playing,” the 69-year-old said. “I got lucky one time at the final table, and it went well from there.”

The computer programmer has actually been playing poker for the last 25 years. This was the 2nd Venetian title for Mastic in the last week. On New Year’s Eve, he defeated 95 players in the $400 buy-in MonsterStack event to make $9,546.

It was another deep run for Liebert, who has been on a tear recently. This summer she final tabled the WSOP senior’s event, banking $186,541 for fifth place and in November she won a WSOP Circuit ring online. She cashed four times at the WPT World Championship, including a fifth-place finish in the Ladies Championship.

Foxen, nee Bicknell, had a good chance at the win but had her pocket aces cracked by Jaffee’s A-10. It was Jaffee’s second big suckout, having also beaten pocket kings with K-Q to bust Adam Walton in 13th place.

Jaffee’s good fortune finally ran out after running a dominated ace into Mastic during three-handed play.

With that, Mastic took a 4:3 chip lead over Marquis Waters to start heads-up play. After Waters asked for a chop, however, the two decided to pause the clock.

After breaking down the chip stacks and running the numbers, the two agreed to end the tournament with a deal. Waters took home $128,500, with Mastic signing for $131,746.