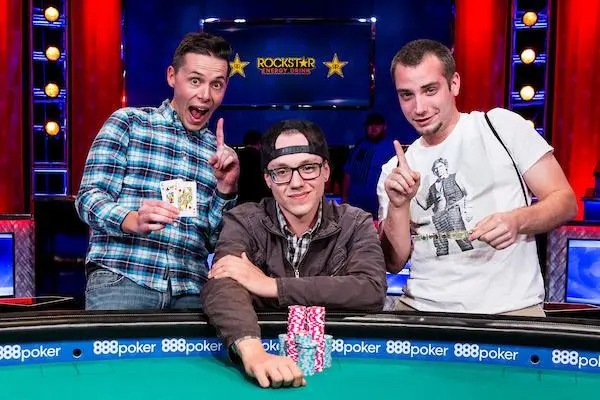 Jordan Hufty waited 15 years for what happened on Thursday evening at the Rio. He accomplished his poker dream by winning a World Series of Poker bracelet in the $565 Casino Employees event.

The Las Vegas poker dealer and supervisor defeated a field of 566 entries to earn $61,909 and what he’s been dreaming about since 2003.

“I’ve thought about winning a bracelet about every day of my life for the past 15 years,” said Hufty. “So, to actually have it come through today is pretty special.”

Originally from Michigan, Hufty moved out to Las Vegas about five years ago with two of his friends from college. They came out to the desert with poker on their minds and success as their goals. They were both on his rail when the final card was dealt and Hufty became the latest WSOP bracelet winner.

After the final card hit the felt and Hufty locked up a win, he was overcome with emotion. He took a few moments to shed a few tears of joy, embrace his friends and take in the moment.

“There’s not even words for it,” said Hufty. “Whenever you build something up like that for so long, and like especially something, where so much of it is out of your control. Even if you do everything completely perfect, there is still a reasonable chance that you don’t ever come through and get a bracelet. For me to do that and be able to capitalize on that, it’s huge.”

While Hufty credited a ton of study of the game as the main reason for his success on Thursday, he knew that he wouldn’t have gotten that work ethic without meeting his eventual Las Vegas roommates.

“Two people that I definitely want to thank are the two guys on my rail here,” said Hufty. “100 percent I wouldn’t be here if I didn’t meet those two guys right here. They are definitely the biggest influence on my game over the last four or five years, ever since I moved out to Vegas with them.

“When I met these guys, my poker game and my study habits and stuff started to slack a bit. Then, I moved to college and met these two guys. For the first time, I met people that I thought were significantly better than me. That was able to motivate me, and obviously, once I got back into [studying] the game, they were really big into it too.”

Before Thursday’s score, Hufty only recorded two previous live tournament cashes, for less than $2,000 combined. He isn’t a fish by any means, with most of his tournament experience coming online, but he has plenty of experience in high stakes poker, just on the other side of it.

Hufty dealt on old episodes of ‘Poker After Dark’ as well as dealing and flooring some of the highest stakes games in Las Vegas. Having that experience under his belt, he felt right at home playing for all the proverbial marbles on poker’s biggest stage.

“It didn’t feel so out of place to me,” said Hufty. “This is the first time I’ve played on a table like this with the lights, and the people watching, and reporting. I don’t know if it’s from my experience in being around poker for higher amounts of money, but I felt comfortable coming in today. I thought I would feel slightly more out of place coming in.”

With 15 years of poker experience and now a bracelet to his name, it would be easy for Hufty to relax and bask in his accomplishment. Poker is what drives Hufty, though. It doesn’t seem like he’s going to take some time off any time soon and will just continue to push himself to get better.

“Passion is a weird thing,” said Hufty. “I’m not really passionate about a whole lot of stuff and to find something that I actually care about, it doesn’t come very often. Once I found something I really, truly enjoyed and realized that there is a way to make money at that, it’s just a never-ending hunger. The fire is just as strong now as it was two days ago before I bought into this.”

The second and final day of what was the first event on the schedule got underway at noon with 13 players remaining. Just 30 minutes into the day, they were down to 10 players, with Hufty taking his seat at the final table second in chips.

Once they were at one table, however, Hufty took over. He scored a double knockout to eliminate Brad Helm in 10th place and Jason Pepper in ninth when Hufty’s pocket kings got all in preflop against Pepper’s ace-king and Helm’s ace-seven suited.

That moved Hufty into the chip lead. A lead that he never relinquished.

“Yeah, I came in with a pretty good feel for my table,” said Hufty. “I’d been playing with the same group for a while last night and felt pretty confident coming in.”

He had the best hand in his previous confrontation, but Hufty sent Skyler Yeaton home in eighth place after he spiked a three-outer. Yeaton found the last of his chips in the middle preflop with ace-queen against Hufty’s ace-four.

Yeaton’s rail started shouting for a four, not realizing it was Hufty who needed the four, and unfortunately for Yeaton, they got what they asked for. Hufty spiked a four on the flop and Yeaton never improved enough to stay alive.

Thomas Yenowine lost a flip with ace-king against Sanders’ pocket deuces to leave the tournament with six players. Tom Booker was eliminated by Zachary Seymour in sixth place and then Hufty got back to work.

He moved over the million-chip mark during six-handed play and then eliminated Won Kim in fifth place with his ace-king against Kim’s ace-eight. Just a few minutes later, Hufty eliminated Seymour in fourth place when he won a flip with ace-jack suited against Seymour’s pocket nines.

Three-handed play lasted for about an hour before Kate Kopp fell in third, running into the buzzsaw that was Hufty.  Kopp moved all in on the button for about 13 big blinds with   , but ran into Hufty’s pocket aces in the big blind.

About three hours into the day, the final 13 players were down to heads-up play. Hufty held a nearly 2-to-1 chip lead. Sanders didn’t roll over, however, and over the next 40 hands, pulled back to nearly even with Hufty.

“That heads-up battle, we started off super deep, so it took a long longer than I thought,” said Hufty. “But any time you start 70 plus big blinds deep in a heads-up match with hour levels, that can definitely happen.”

Hufty never let Sanders take the lead and pulled away again, opening a 3-to-1 lead over another 50 hands. After nearly five hours of heads-up play, which was most of the day’s action, Hufty finished off Sanders when his king-queen bested Sanders’ pocket threes.