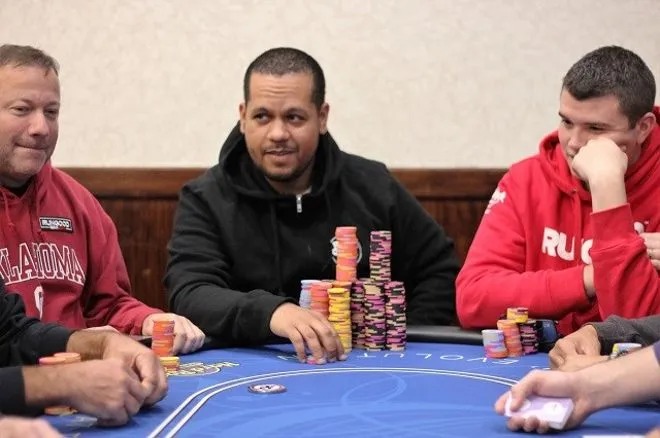 Last weekend, this weekly feature did not appear on our site as I traveled to Chicago to play in the $1,675 buy-in World Series of Poker Circuit Horseshoe Hammond Main Event. Things did not go as planned in the event as I was unable to even give myself a sweat by making it to Day 2, but perhaps I can discuss an interesting hand or two, at least.

The early levels had gone fairly well for me and I had built my starting stack of 20,000 up to about 37,000 when a fun hand came up against Jose Montes (pictured above) who had me covered in this hand.

Montes is a traveling pro who has been very successful the past few years. He seemed to be playing pretty aggressively as he had opened a number of pots and three-bet a few more. Meanwhile I had been on the tighter side as I hadn’t been dealt much.

Concept and Analysis
Preflop, I expect Montes to be opening pretty wide from the hijack. He had been playing lots of hands in late position, although he hadn’t shown down much. Fives seem like a pretty standard call from the big blind, where I’m getting a great price but don’t want to three-bet to start building a massive pot with a hand that’s likely to be mediocre after the flop.

On the {6-}{7-}{6-} flop, I think it’s a pretty easy check-call. My hand should be the best hand here the majority of the time. Of course, it’s likely to get tricky to play on some later streets when more overcards arrive. But, I would usually want to check-call my strong hands here, too, since he isn’t likely to have anything to pay me off.

The turn is where things start to get interesting. A king is a pretty good card for his range and bad for mine since I check-called that flop. He’ll have lots of hands he stabbed at the pot with that include kings, so it’s a pretty mandatory barrel card for him.

There’s probably merit to folding right here, especially against good, aggressive players. They’re going to put you in tough spots on the river sometimes. Plus, there’s now six cards that could come — any king or seven — that would completely kill my hand. He also sized his bet more than double his flop bet, indicating a big river barrel might be coming.

However, in the actual hand, I did decide to call and see the river. I think I’m still beating a decent chunk of his range, such as {a-}{x-} hands and stuff like {q-}{j-}.

When the {a-} fell — no flushes were possible this hand — I was looking at a really ugly runout. I checked and he bet 5,500, and at this point, I don’t think there’s enough air in his hand for me to profitably call. I quickly dismissed that option, but it occurred to me that I could fire out a raise to about 15,000 instead and turn my hand into a bluff.

All of the ingredients were in place. My opponent was a late position opener, meaning he was more likely to have a weaker range. I was in the big blind facing almost a min-raise preflop, so I could absolutely have a six in my hand. And I could credibly represent a six since slow playing would be understandable on such a dry board. Finally, I had been playing fairly tight and hadn’t shown down anything too crazy.