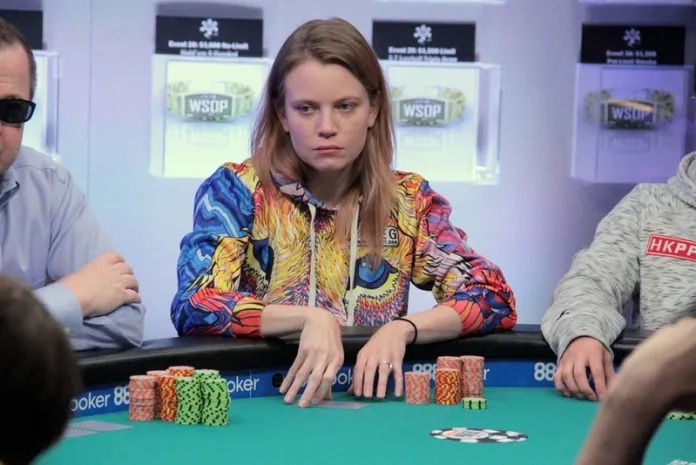 A bitter staking dispute between poker pros Cate Hall and Chad Power began unfolding publicly Monday on Twitter, with the former accusing the latter of “extortion.”

According to Hall, she entered into the staking arrangement for cash games “a little over a year ago.” Power claimed that she lost $60,000 playing mid-stakes cash games during the time frame. Hall isn’t disputing that figure. Both Hall and Power hail from the Washington, D.C. area, which is one of the hottest live poker scenes in the country.

However, Hall says that under the terms of their deal she would not be liable for the losses in the event that she took an extended break from playing poker and their backing deal was severed. Under the deal, Power would get a cut of whatever she won playing on his dime.

“Chad claims to be motivated [in making the dispute public] by interests of potential backers, so I’m posting a full account of the dispute to negate that,” Hall said on Twitter. “If you’re interested in backing me in the future, know I’d never agree to a deal where I’m on the hook for 100 percent of losses but only get a share of profits.”

“He says that unless I pay him the full amount of the makeup, he will publicly drag me as a scammer,” Hall continued. “It’s been awhile since I practiced law, but if that’s not outright extortion, it’s at least extortion-adjacent.”

It’s not uncommon in the poker world for staking deals to be completely terminated with the staked player having lost his or her backer money. Hall has more than $1 million in career tournament scores, including three WPT final tables.

Hall admitted that their deal didn’t turn out to be a good one for Power, but that’s not her problem. She said that she stepped away from the poker tables due to personal issues.

“One thing Chad said merits further attention: I was a shitty horse,” Hall explained. “That’s true. As most people who follow me know, I entered into a spiritual and mental health crisis a year ago and have played little poker since. I didn’t get to choose whether to have a mental health crisis, but I did get to decide whether to play with someone else’s money while that was going on, or to live on savings for a year, and I chose the latter. I think that was the right decision for everyone.” Power disputes Hall’s account. He said that their deal requires her to fork over the $60,000 she lost. However, he wrote in a TwoPlusTwoforum post that he isn’t expecting any money from Hall. He said he has no documentation to show she agreed to paying back 100 percent of her losses. Rather, he wanted to make the dispute public as a “warning” to anyone in poker who might back Hall in the future.

Power, who claims to stake about 40 poker players, said that he enters into deals under which his horses can only absolve their makeup if he drops them. In other words, they can’t drop him.

According to Power, Hall played as big as $25-$50 no-limit hold’em while they had a backing arrangement together. He also accused her of drug use and not being able to beat $1-$3 no-limit hold’em. Power claimed that Hall lost close to half of the $60,000 in just two mid-stakes cash game sessions early this year. He said she was playing against the likes of Phil Hellmuth, Mike Matusow and Brandon Cantu.

Hall claims Power was trying to take advantage of her.

“[I]t was pointed out to me that Chad has likely attempted similar strong-arm techniques with people less familiar with the law,” she wrote. “You have no legal obligation to pay a backer the amount of makeup in the event you leave poker, absent a written agreement to the contrary.”

Hall and Power agreed to have an unnamed third party “arbitrate” their dispute. The arbitrator said that it would not be fair for Hall to owe $60,000 because there is “no proof” of her agreeing to those terms. However, the arbitrator suggested they resolve the dispute amicably in the form of a “buyout” or resume their backing arrangement when Hall is ready to continue her poker career.

“Despite agreeing to binding arbitration, despite the arbitrators agreeing with my position, and despite the fact that Chad has explicitly acknowledged that nothing I’ve done violates our agreement, Chad has refused to abide by the arbitrators’ determination,” Hall said.

Power called that claim “false” and said he accepts the arbitrator’s finding.