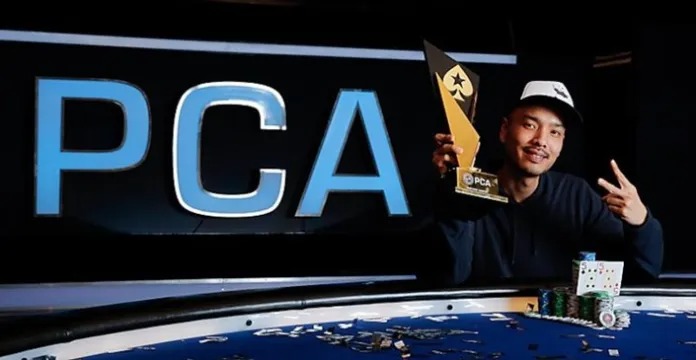 Rheem broke through the $10million tournament winnings mark with his emphatic victory, his second biggest ever payday and his fifth 7-figure score of a career that now stretches over a decade and a half.

The final 6 was all that was left of an 865-entry field who started out five days ago at the Atlantis resort, but no-one could match Rheem as he joked and powered his way through the opposition, Brian Altman first to fall as he ran into Rheem’s pocket queens.

Highstakes cash game pro Vicent Bosca was next to bust, quite some time later, failing to hit his numerous draws after Rheem had cheekily put him all-in with bottom pair, and when Ukrainian Pavel Veksler lost a race we were down to just three.

Of the trio, Scott Wellenbach has been much in the news this week, his plan to donate most of his winnings to charity very much a feel-good story for the ages. His $671,240 cash when he fell in 3rd spot may well be the biggest-ever donation from a poker player in the history of the game.

It was another, less even, race that brought Rheem the title when his pocket fives held up against Daniel Strelitz’s Ace-deuce, and as he told PokerNews afterwards: “Things just went my way. Nature ran its course and obviously, it was fun.”

He added: “It’s an honor. I’m very grateful to even have the opportunity to come here and play, and I’m blessed to be able to win it.”