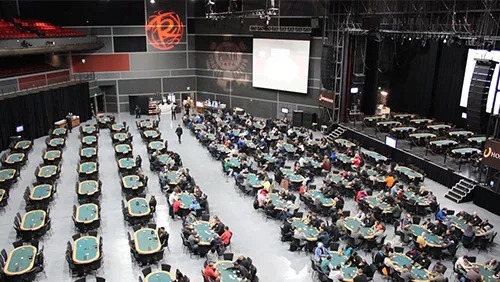 Chris Fuchs, an IT sales specialist by day, topped the behemoth field of the WSOP Circuit Horseshoe Hammond Opening Event for his debut gold ring from the series and a hefty first-place prize of $124,385.

Fuchs has been playing poker recreationally for over a decade now. And the player played the Horseshoe Hammond stop for a fifth straight year. He told WSOP staff after his triumph in the series that he had not planned to take part in the upcoming Main Event but, encouraged by his success in the opening event, he decided to take a shot at the $1,700 buy-in tournament that is set to take place over the weekend.

The opening event at Horseshoe Hammond once again drew a massive field. As many as 2,563 entries registered into the tournament. They created a prize pool of $845,790, easily beating the $777,777 guarantee. The top 272 spots got paid, min-cashes starting from $294.

The event featured five starting flights and a second, and final, day of play. Day 2 of the tournament was played on Sunday. Only 220 survivors returned to the host casino that day to play down to a champion. And it did not take long before the unofficial final table of ten was set.

Fuchs was the chip leader at the time with a massive advantage of 4 million over his nearest rival. The player had 9.63 million at the start of the final table. Nicholas Cikulin was ranking second in the temporary leaderboard at that point with 5.235 million in chips.

Fuchs pretty much maintained his advantage over the course of final table play. The player told WSOP staff that he had run pretty well throughout that closing stage with good cards coming his way all the time. And indeed, the player performed extremely well and took advantage of what he was offered at the table to eventually emerge victorious and be crown as the champion of the first tournament on the schedule of this year’s WSOP Circuit Horseshoe Hammond.

The winner eventually faced James Gregg for their final heads-up match. Gregg, a New Berlin, Wisconsin resident, was too vying for his first gold ring from the series. However, the piece was not meant for him this time. The player was defeated by Fuchs to collect $77,362 for his runner-up finish.

As mentioned earlier, Fuchs will be seen next weekend when the Main Event will be taking place. The tournament is scheduled to kick off Friday, October 19 with the first of its two starting flights. It will feature a guaranteed prize pool of $1 million, but it is yet to be seen whether it will be surpassed.