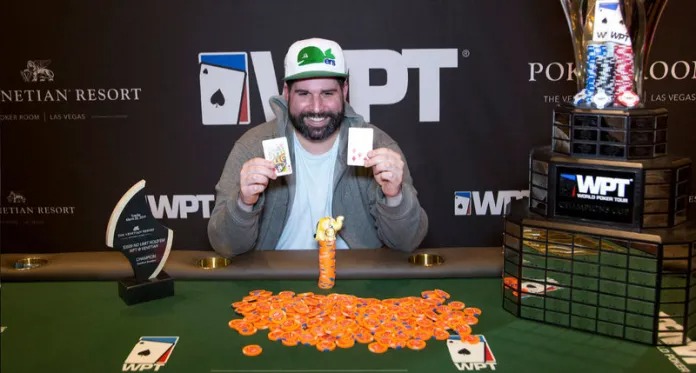 Ben Palmer has won the inaugural World Poker Tour Venetian DeepStack Showdown $3,500 buy-in no-limit hold’em main event, defeating a field of 734 entries to secure his first WPT title and the top prize of $431,655. This was his 340th career live tournament cash and by far his largest. The win brought his lifetime earnings to $2,732,635.

This was the first WPT main event ever held at The Venetian® Resort Las Vegas. The huge turnout saw the $1,000,000 guarantee easily surpassed, with the final prize pool growing to $2,333,800.

It took three full days of action to narrow the sea of entrants down to a final table of nine players. Palmer held the lead going into day 4, with 2013 World Series of Poker main event runner-up Jay Farber as his closest competitor.

Palmer furthered his advantage by knocking out recent WSOP Circuit Bicycle Casino main event winner Sean Yu. Yu had just lost with pocket jacks against the A-Q of Mark Ioli to fall to the bottom of the leaderboard. He got all-in with ADiamond SuitJClub Suit and ran into the 10Spade Suit10Diamond Suit of Palmer. Yu failed to improve and was eliminated in ninth place ($41,665).

Despite coming into the day in second chip position, Jay Farber was the next to hit the rail. In his final hand he got all-in with AHeart Suit9Heart Suit and was called by the ADiamond SuitKSpade Suit of Mark Ioli. Neither player improved and Faber had to settle for eighth place ($52,790).

Palmer scored his second bustout of the final table when his AHeart SuitKClub Suit outran the 9Spade Suit9Heart Suit of Skip Wilson. Palmer paired his ace on the turn to win the pot and send Wilson home with $67,675 as the seventh-place finisher.

It took nearly 70 more hands until the next elimination went down. WSOP bracelet winner William Givens got his last chips in with the KHeart Suit10Club Suit. Mark Ioli held the AClub Suit8Club Suit and made trip aces by the turn to knock Givens out in sixth place ($87,760).

In the next major confrontation, Mark Ioli flopped top two pair out of the big blind and called a continuation bet from Palmer, who promptly hit his gutshot straight draw on the turn. Palmer bet again on the turn and then moved all-in on the river. Ioli called and was eliminated in fifth place ($115,105).

With that Palmer surged to over 13 million in chips. Tony Gargano closed the gap a bit by knocking out Orlando Barrera in fourth place ($152,690), having flopped quads with his pocket kings. Barrera shoved after the flop with pocket sixes and found himself drawing dead with two cards to come.

Gargano went on to knock out Danny Qutami in third place ($204,810), calling his three-bet shove with AHeart SuitQHeart Suit and holding up against the AClub Suit8Heart Suit. With that Gargano overtook the lead, entering heads-up play with 16.8 million to Palmer’s 12.5 million.

The final two players battled it out for 64 hands, with a few lead changes along the way. In the final hand, Gargano moved all-in from the button for 9.5 million. Palmer thought it over for a while before making the call with QDiamond Suit10Diamond Suit. Gargano held the AHeart Suit4Club Suit. The board ran out JClub Suit10Heart Suit9Club Suit6Club SuitQHeart Suit to give Palmer two pair, the pot and the title. Gargano took home $277,760 as the runner-up finisher.

Palmer was awarded 1,368 Card Player Player of the Year points for the win, enough to see him climb into 41st place on the overall POY rankings.