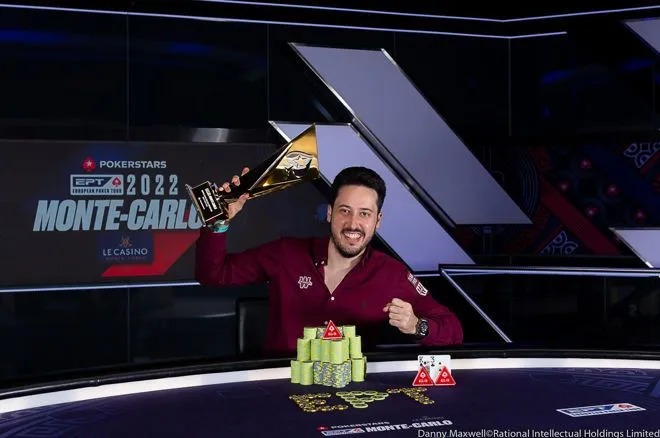 The Spanish professional player Adrian Mateos defeated Marius Gierse in the 2022 EPT Monte Carlo €100,000 buy-in no-limit hold’em super high roller event, earning €1,385,430 ($1,454,702 USD) and his 20th live tournament title. Mateos now has more than $27.8 million in lifetime earnings, enough to put him in 18th place on poker’s all-time money list. He is the runaway leader on the Spanish money list, with more than twice the earnings of his nearest competitor in Sergio Aido ($12.9 million).

The third and final day of this high-stakes event began with six players remaining, all of whom were in the money after Orpen Kisacikoglu was knocked out on the bubble to bring day 2 to a close. Mateos picked up pocket tens against Kisacikoglu’s A-10 and held to extend the Spaniard’s chip lead going into the final table.

Kent Staahle was the first to fall inside the money, with his pocket nines running into the pocket aces of Marius Gierse. The Norwegian was unable to come from behind and was eliminated in sixth place ($299,502 USD).

Not long after Staahle hit the rail, Hungarian poker pro Laszlo Bujtas found himself all-in with A-5 leading the J-10 of Belarus’ Mikalai Vaskaboinikau. Bujtas paired his ace on the turn, but the card also gave Vaskaboinikau an ace-high straight to leave Bujtas drawing dead. He earned $385,077 USD for his third live high roller cash of the year. He now has more than $4.5 million in live earnings to his name.

Four-handed play continued for roughly two hours. Despite having scored the most recent knockout, Vaskaboinikau was the player who fell to the bottom of the chip counts. he ended up calling all-in for just shy of nine big blinds out of the big blind with KSpade Suit7Club Suit. Mateos had shoved with JHeart Suit10Diamond Suit from the small blind. A jack-high flop gave Mateos the lead, which he maintained through the river to send Vaskaboinikau home in fourth place ($492,041 USD).

Mateos took a healthy lead into three-handed play, with his 5,410,000 representing more than half of the chips in play. His lead went from sizable to gigantic thanks to picking off two big bluffs, one from each of his remaining opponents. In both instances, he flopped top pair and called his way to victory, leaving his opponents on fumes.

Bracelet winner and high-stakes tournament crusher Mikita Badziakouski was the first to succumb. He shoved his last handful of big blinds with ADiamond Suit2Diamond Suit from the button. Mateos called with AClub Suit10Diamond Suit from the big blind and the board ran out KSpade SuitKHeart Suit10Club Suit7Club Suit7Heart Suit to eliminate Badziakouski in third place ($641,792 USD). The score increased the Belarusian’s lifetime earnings to more than $35.2 million, which is good for ninth place on poker’s all-time money list. He also scored 400 POY points, which saw him climb into 71st place in the rankings.

With that Mateos grew his stack to over 10 million, while Gierse sat with less than 400,000. Gierse managed to score one double up, but he was unable to win the second time he found himself all-in and at risk. With blinds of 40,000-80,000 and an 80,000 big blind ante, he shoved 690,000 from the button holding JClub Suit4Spade Suit, Mateos called with KSpade Suit3Club Suit and the ADiamond SuitQHeart Suit6Club Suit9Heart Suit9Diamond Suit saw him lock up both the pot and the title. Gierse, who recently won a $25,000 event at the Super High Roller Series Europe, earned $1,005,470 as the runner-up in this event. With three final-table finishes and more than $1.6 million in year-to-date earnings, the German poker pro now sits in 64th place in the overall POY standings.