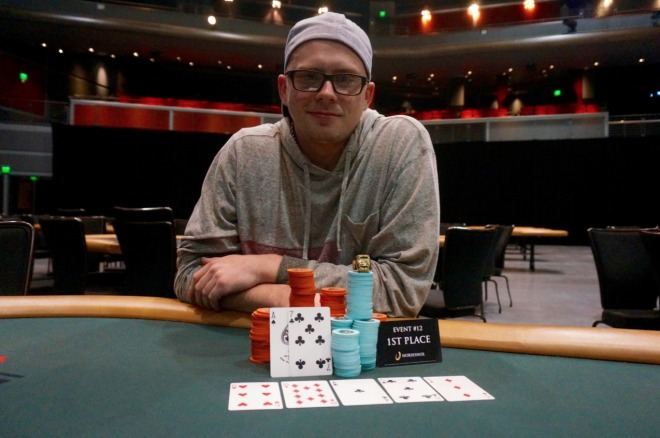 US’ poker pro Zachery Schneider came out victorious Monday night at the $1,700 Main Event during the 2018/2019 WSOP Circuit Horseshoe Hammond. After three days of grinding poker play, he managed to survive the strong 1,094 entry field and take the title, securing the second WSOP ring in his career.

It was an easy victory for Schneider, who started Day 3 of the tournament with the second biggest stack and once the final table was set up, he came second in the chip count once again. The 25-year-old professional poker player then eliminated four of the nine finalists and overtook Nick Pupillo in the heads-up battle. There were no serious hurdles to get over, he later admitted after taking the WSOP Circuit Main Event title and the first-place prize of $302,492.

This is the 11th WSOP event cash and the second ring for the young poker pro from Harvard, Illinois. Almost exactly three years ago, on October 25, 2015, Schneider finished first in the WSOP Circuit $5,300 NHL High Roller Ring Event, which took place at the same casino, the Horseshoe Hammond, just 25 miles away from Chicago. Back then, he won the first World Series of Poker ring in his career along with a cash prize of $101,250.

Monday’s win was a huge success for Schneider, who said that he was not such a good player and it was not until the final table that became confident in his own skills. During the entire tournament, he was not entirely serious on the felt, he added, so the first-place finish was, apparently, a surprise for him. It was also his largest live reported cash ever and now his total earnings from live tournaments total nearly $450,000.

Apart from Zachery Schneider, another 116 players made it to the money levels and received guaranteed $2,718. The tournament drew in 1,094 contenders for the title over the two starting flights on Friday and Saturday. Entering the $1,700 buy-in event, they contributed to a total prize pool of $1,657,410. Day 1 ended with most players eliminated and the chip leader from the first flight returned as the big stack on Day 2, along with 235 other survivors. By the end of the night, the field was reduced to only 23 players, who would continue playing on the third, final day.

Day 3 of the tournament kicked off at noon with Sam Miller leading the way with his stack of 3,535,000. He was followed by Schneider, who had bagged 2.8 million in tournament chips the previous night. Two-time gold ring winner Nick Pupillo came third in the temporary leaderboard with a stack of 1.85 million in chips. Soon after cards went into the air, Miller lost his lead to David McDermott, while the first elimination was Kevin Johnson who took home $11,386 for his 23rd finish.

Following several eliminations and a fortunate win against Porfirio Mendez (19th, $13,524), Schneider took the chip lead and right until the heads-up battle, he did not go too far from the first position. After Don Hines was sent home in 11th place for $24,182, the final table was set up led by Nick Pupillo who had a huge advantage with his stack of over 9 million. Zachert Schneider came in second with 7,555,000 in chips, while the rest of the players could not reach the 3 million. Miller was the short stack with only 385,000 and he was almost immediately eliminated in the 10th place for $24,182.

Royce Matheson finished 9th ($29,999) after being defeated by Schneider, while the 8th place in the tournament was for Jake Baumgartner ($37,640) who was sent home by Pupillo. He then eliminated Mark Wahba (7th, $47,750). After the dinner break, Giuliano Lentini left the tournament (6th, $61,258), followed by the person who eliminated him, Young Hoon Koh (5th, $79,506). By that time, the two main contenders were Pupillo and Schneider and after David McDermott (4th, $104,417) finally gave in, Sami Shurbaji and the two players were the only survivors. Shurbaji moved all in against Schneider and lost, collecting a nice cash prize of $138,825 for his third-place finish.

Schneider started the heads-up against Pupillo with a 2 to 1 advantage and did not have to try a lot to claim the title. In the final hand, Schneider defeated his competitor with Queen-7 against Pupillo’s 4-2 on a flop of Queen-6-5, a 6 on the turn and a King on the river. Pupillo was eliminated in the second place and took home $186,823, while Schneider was crowned Horseshoe Hammond Main Event Champion and received $302,492.