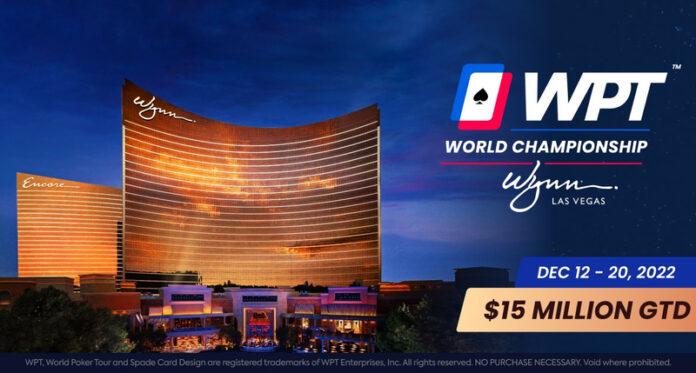 For the first time ever before, the World Poker Tour is heading to Wynn Las Vegas. The action goes down in December, bringing the trip’s present season to a record-breaking verdict.

“This is one of the most ambitious initiatives the World Poker Tour has undertaken in our 20-year history,” said WPT CEO Adam Pliska. “We expect this to be a highly anticipated festival and are elated to be partnering with Wynn Las Vegas to bring this concept to life.”

The WPT World Championship at Wynn Las Vegas will feature a televised final table. There will be three single-entry starting flights, each beginning at 11 a.m. local time from Dec. 12-14, with the champion set to be decided at the final table played on Dec. 20. Players will start with 100,000 in tournament chips, with hour-long levels to start and 90-minute levels later on in the tournament.

In addition to earning the lion’s share of the massive eight-figure prize pool, the eventual champion will also have their name added to the Mike Sexton WPT Champions Cup, named after the late WPT host and Poker Hall of Fame member.

According to a recent press release from the WPT, more than 500 players are expected to qualify for this monumental event via online and in-person satellites. WPT World Championship passports, valued at $12,000, have already been awarded through WPT Global, ClubWPT™ and the WPT live casino partners around the world. For more information about the many avenues to win your way into this event, check out the WPT’s official website.

This will be the tenth and final WPT main tour event of the season. So far, seven WPT main events have been completed, with nearly 8,500 entries made and $30.1 million in total prize money awarded along the way. That’s an average turnout of over 1,200 entries per event, with nearly $4.3 million paid out per tournament.

There are to be two more WPT main events that will be held before the season-ending champion, the first being the WPT Five Diamond at Bellagio Hotel Casino in late October and the second the WPT Rock ‘N’ Roll Poker Open at Seminole Hard Rock Hotel & Casino Hollywood in November.

While the guarantee for the WPT World Championship at Wynn Las Vegas is unprecedented, this tournament will not be the first eight-figure guaranteed event that the Wynn has run. The luxury resort, which first opened in 2005, has twice played host to the $10 million guaranteed Wynn Millions main event, which first debuted in 2021. The venue is now set to raise the stakes even higher alongside the WPT.

“We offer our guests the biggest and best poker experiences available, coupled with the world-class service and amenities that can only be found at Wynn Las Vegas,” said Ryan Beauregard, Executive Director of Poker Operations at Wynn Las Vegas. “In partnership with WPT, we have created a festival that will be a one-of-a-kind, must-attend event for both our current and new players.”

This record-breaking event will be part of the inaugural WPT World Championship at Wynn Las Vegas series that is scheduled to run Dec. 1-20. The festival features 23 events with $22 million in guaranteed prize money.

Check out the full schedule on Card Player’s tournament database, or via the image below (click to enlarge): 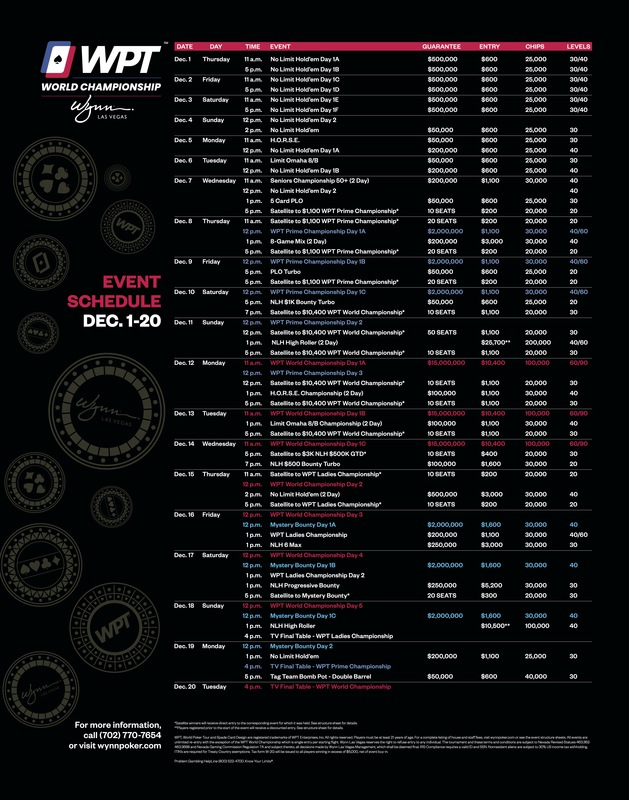