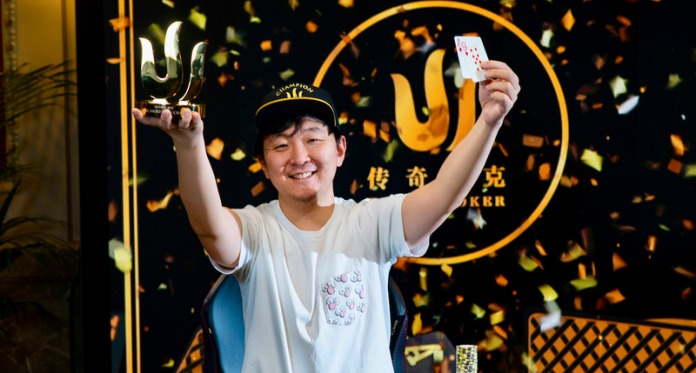 Rui Cao had not recorded a live poker tournament score since the summer of 2019, but the French high-stakes player ended his nearly three-year hiatus in style with a win in the 2022 Triton Series Madrid €25,000 buy-in short deck event. Cao defeated a field of 68 total entries to secure his second Triton trophy, along with the top payout of €497,000 ($521,850 USD).

The victory also saw Cao secure 504 Card Player Player of the Year points. This was his first qualified score for the 2022 POY race, which is sponsored by Global Poker.

The second and final day began with just 13 players remaining and nine set to make the money. Chris Brewer, just one day removed from a win in the €20,000 buy-in short deck event, was eliminated on the money bubble to ensure that the remaining nine all locked up at least $51,870. That sum ultimately went to Ryan Yum. Isaac Haxton followed in eighth place ($67,830 USD) when his Q-10 suited failed to outrun the A-Q of Kenneth Kee.

Santi Jiang was the next to fall, with his A-9 suited running into the A-Q of Cao. Both players made a pair, but Cao’s queens were best and Jiang was knocked out in seventh place ($87,675 USD).

Jason Koon, a World Series of Poker bracelet winner and three-time Triton champion, saw his run come to an end in sixth place ($110,670 USD) when his 10-9 suited was beaten by the A-10 of Cao. Koon also earned 168 POY points for his eighth final-table showing of the year. With 2,145 points and more than $2 million in year-to-date earnings, Koon now sits in 12th place in the overall standings. With more than $37.2 million in career earnings, Koon remains in eighth place on poker’s all-time money list.

Choon Siow got the last of his chips in with pocket kings leading the Q-10 suited of Kee, but the board gave Kee queens and tens to win the pot. Siow earned $142,800 as the fifth-place finisher.

Tom Dwan called off the last of his short stack with Q-10, only to be shown a dominating K-10 by Cao. King high was best by the river and Dwan was eliminated in fourth place, earning $183,855 for his second final-table finish in as many days.

Kee slid down the leaderboard during three-handed action. He eventually got all-in with A-K leading the A-Q suited of Cao, but a couple of queens on the board sent Kee packing in third place ($243,600 USD).

With that Cao took more than a 2:1 chip lead into heads-up play with Richard Yong. A big hand saw Yong close the gap considerably, and he had a chance to take a huge lead of his own when he rivered a full house against Cao’s straight that was also completed on fifth street. Cao bet folded on the paired board to preserve a big chunk of his stack. Yong took down the pot to move into the lead, but Cao soon moved back in front and then extended his advantage.

By the time the final hand was dealt, Cao held nearly a 4:1 chip advantage. All the chips got in with Cao holding ADiamond Suit9Diamond Suit while Yong had the 10Heart Suit8Heart Suit. The board ran out 9Club Suit8Spade Suit7Diamond Suit9Spade Suit8Diamond Suit to give both players a full house. Yong’s eighths full was second-best, though, and he was knocked out in second place ($374,850 USD). The Malaysian now has nearly $15 million in lifetime tournament cashes.