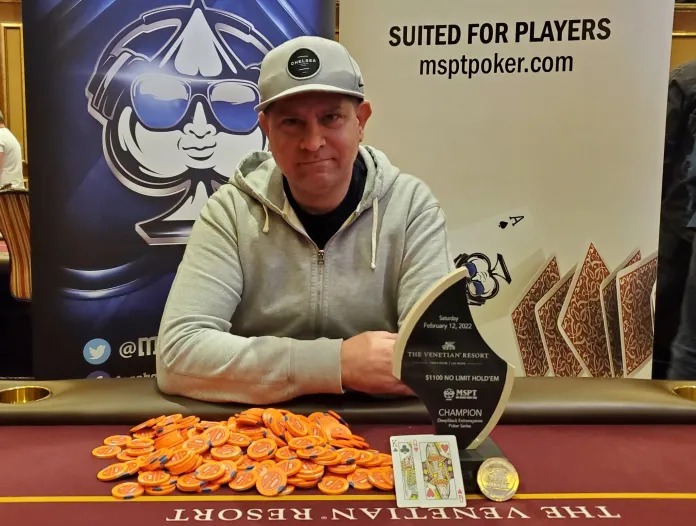 The NFL’s Rams were not the only winners from the Los Angeles area crowned this weekend.

West had over 100 prior recorded tournament scores to his name, but this was the first time he ever cashed for six figures. The victory increased his lifetime earnings to more than $913,000.

In addition to the title and the money, West also earned 960 Card Player Player of the Year points for the win. This was his first POY-qualified score of the year, but it alone was enough to move him into a three-way tie for 14th place in the 2022 POY race, which is sponsored by Global Poker.

West was the second shortest stack in the field when the final table of nine was set, with Haoyu Tang in the lead and Moreno in second chip position. West scored the first knockout, sending Anthony Danna home in ninth place ($16,154). He moved into second place by the time the field had been narrowed to six, following the eliminations of Brendan Shiller (8th – $20,218) and Brian Sivertsen (7th – $26,065).

Moreno earned his first elimination at the final table when his A-Q held up against the trailing K-Q of Tang (6th – $34,687). Moreno made aces and tens by the river to take down the pot.

Go Mori was the next to fall. The Japanese player ran K-9 into the K-10 of Cedrric Trevino, who is known to many on social media as ‘Poker Traveler’. Mori failed to come from behind and was eliminated in fifth place ($46,580). Despite scoring that knockout, Trevino soon followed Mori to the rail. He got all-in with A-J and was racing against the pocket nines of West. Trevino improved to a pair of jacks on the turn to take a commanding lead, but a nine on the river gave West a set and the pot. Trevino cashed for $62,436.

Aaron Massey was the most accomplished live tournament player at this final table, having nearly $4.7 million in prior cashes to his name. He ultimately added another $87,213 to that total as the third-place finisher in this event, with his run coming to an end thanks when his pocket sevens clashed with the pocket nines of Moreno.

Heads-up play began with Moreno holding 14,200,000 to the 11,400,000 of West. West was able to overtake the lead and then extend it before the final hand arose. Moreno moved all-in for around 14 big blinds with 2Spade Suit2Club Suit from the button. West called with KClub SuitQHeart Suit and the board ran out QSpade SuitJHeart Suit10Spade SuitJDiamond SuitAClub Suit to give West a winning straight. Moreno earned $124,675 for the first six-figure score of his career.