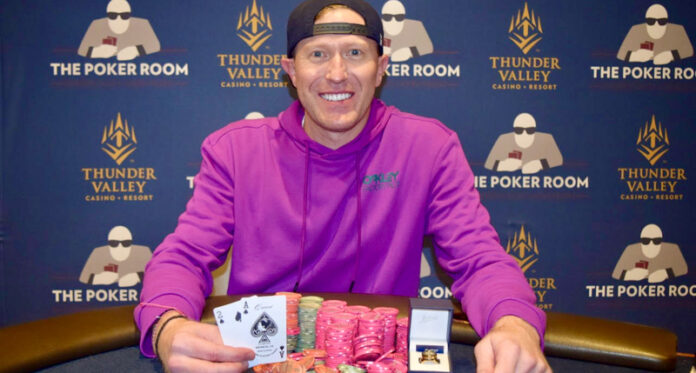 ‘Zack’ Grossglauser is the latest WSOP Circuit main event champion to be decided in 2022. The Elk Grove, California resident defeated a field of 726 entrants in the $1,700 buy-in No-Limit hold’em main event of the WSOP Circuit Thunder Valley series, securing his first WSOPC gold ring and $205,203 as prizepool.

“It was a tough three days,” Grossglauser said. “Coming into day two I was at about 25th place, so not that high up on the board. I waited for the the right cards and the right spots to come, I think the biggest key for me in this tournament was never looking at the pay jumps. I never really looked at the money bubble or worried about where I was in regards to chip average. I just played my hands and tried to stay focused.”

The approach seemed to pay off in a major way for Grossglauser, who came into this event with just over $27,000 in prior tournament earnings. His largest previous score was a $15,000 cash he earned as the 880th-place finisher in the 2015 WSOP main event.

Grossglauser may have entered day 2 in 26th chip position among the 160 remaining hopefuls at that point, but he ended the day as the outright leader with just 14 left in contention. By the time the official final table of nine was set, Altynai Fung had overtaken the top spot, but Grossglauser remained high on the leaderboard.

A pair of preflop coolers spelled the end of Brian Battistone’s (9th – $19,289) and Kristen Deardorff’s (8th – $24,380) runs in this event. Phaly Nou ran J-4 offsuit into the pocket aces of Randall Chamberlain to finish seventh ($31,181). Moments after that, Michael Loncar got all-in with pocket sevens trailing the pocket nines of Jared Smith. Loncar was unable to come from behind and was sent home in sixth place ($40,329).

Grossglauser scored his first knockout of the day when his pocket sixes won a preflop race against the A-Q of Paul Richardson. An ace-high flop gave Richardson a big lead, which he maintained through a blank on the turn. A six on the river gave Grossglauser a set to secure the pot. Richardson was sent to the rail with $52,820 for his fifth-place showing.

A battle of the blinds brought about the elimination of Altynai Fung in fourth place. Chamberlain shoved from the small blind with A-8 suited. Fung called all-in for around eight big blinds with K-8 suited. Fung flopped a king but had to fade a flush draw and an overcard for Chamberlain. Both the ace and the flush came in, which meant that Fung would have to settle for $69,938 in this event.

Jared Smith got his last chips in ahead, with his A-Q leading the A-6 of Grossglauser. The flop brought a six to give Grossglauser the lead, which he held onto through the river. Smith earned $93,657 as the third-place finisher.

With that, Grossglauser took more than an 8:1 chip lead into heads-up play with Chamberlain. The short stack managed a couple of double-ups with his back to the wall, but was ultimately unable to hold in what turned out to be the final all-in of the event. All of the chips went in preflop, with Chamberlain holding ADiamond SuitJClub Suit and Grossglauser ASpade Suit2Spade Suit. The board ran out 7Club Suit6Diamond Suit2Heart Suit3Club Suit7Spade Suit to give Grossglauser sevens and deuces for the win. Chamberlain took home $126,828 as the runner-up finisher, the largest score of his career by more than $100,000.