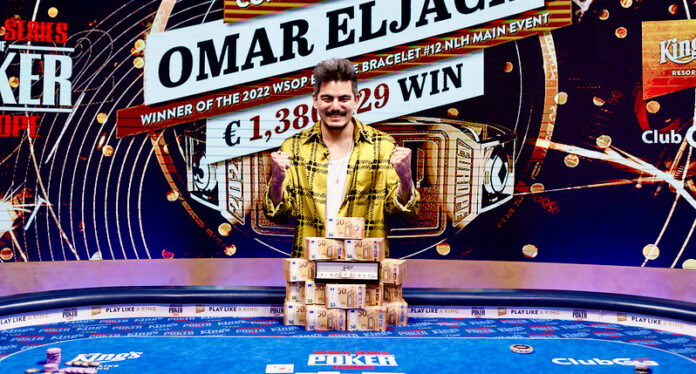 In 2021, the WSOP Europe €10,350 no-limit hold’em main event established a record for the largest turnout in the tournament’s background with 688 entries. The 2022 WSOPE main event blew that number away, with 763 entries being made by the time registration officially closed. Consequently, the prize pool grew to $7,248,500, with six-figure payouts or more for the top nine finishers.

Ultimately, the largest cash advance of all was the $1,380,129 protected by eventual champ Omar Eljach, that won a marathon heads-up battle to secure his first gold bracelet and the top prize of $1,380,129.

“It’s really hard to describe. So many emotions, all of them amazing. Such a draining battle. I feel relief, I feel incredible joy,” The Stockholm, Sweden resident told WSOP reporters. “Yeah, it’s an amazing feeling.”

This event played from Nov. 11-17, with two starting flights and four more days of action. The first starting flight was the larger of the two, with 514 entries on that day alone. For perspective, that turnout was more than the entire field for the majority of the WSOPE main events held to this point.

Day 1B added another 132 entries, while another 117 late entries were made early on day 2. After registration closed at the start of level 13, the field ceased to add players and instead only shed them. There were only 166 players remaining at the end of day 2, with 115 set to cash.

The final day began with Omar Eljach in the lead and just eight players still contending. Bracelet winner Alexandre Reard was the first to fall. The Frenchman from Beaubourg ran pocket queens into the pocket aces of Eljach. Top set on the flop turned into the nut flush for Eljach by the river and Reard was eliminated in eighth place ($138,702).

Two-time bracelet winner Barny Boatman’s run came to an end when his pocket aces were outflopped by the Q-J of five-time bracelet winner Shaun Deeb. Deeb hit two pair and raised Boatman’s continuation bet. Boatman shoved and Deeb called. The turn and river were no help to Boatman and he finished seventh for $180,867. He now has more than $3.7 million in recorded scores to his name.

A classic preflop race spelled the end of Armin Rezaei’s quest for the title in this event. He shoved all-in from the button with pocket jacks and received a call from Eljach, who had picked up A-Q in the big blind. An ace-high flop saw Eljach surge into a lead that he would never relinquish and Rezaei was knocked out in sixth place. He earned $239,466 for his strong showing, the largest score of his career.

Romania’s Paul-Adrian Covaciu was on the other side of a coin flip involving pocket jacks. He held K-Q, and this time the pocket pair remained best by the river. Covaciu was awarded $321,838 for his fifth-place finish, blowing away his previous top score by nearly a quarter of a million dollars.

Four-handed play lasted roughly 90 minutes. The stalemate ended when Vladas Tamasauskas called all-in with pocket nines facing a raise from Deeb, who was the clear chip leader at the time, and a three-bet shove from bracelet winner Jonathan Pastore. Deeb got out of the way and Pastore revealed pocket eights. Tamasauskas was ahead preflop, but an eight hit the board right away to move Pastore into the lead. Tamasauskas had a straight draw, but the board paired on the turn to leave him needing a nine on the end. When one failed to materialize, the Lithuanian hit the rail with a career-best payday of $438,978.

At one point during four-handed play, Deeb had extended his lead to the point that he had roughly half of the total chips in play, but his lead deteriorated quickly during a rough stretch of three-handed action. Shortly after making a correct laydown with trips against the rivered straight of Pastore, Deeb lost a massive hand calling with what ended up being fourth pair on the river. He was up against top and bottom pair for Eljach, who surged into the lead after dragging that pot.

Deeb continued to slide until he called a small-blind shove from Eljach with AHeart SuitJDiamond Suit from the big blind. Eljach had shoved with QClub Suit3Club Suit, which made a pair of threes on the flop to move ahead. The turn paired the board and the river was a blank. With that, Deeb was eliminated in third place. The $607,531 he was awarded in this event grew his career earnings to more than $12 million.

Heads-up play began with Eljach holding 43,000,000 to Pastore’s 33,000,000. The final two went on to battle it out for more than six hours. The lead changed hands multiple times, with the shorter stack mounting a comeback each of the first few times their opponent began to pull away.

Pastore earned $852,949 and 1,900 POY points as the runner-up. This was the largest score of the French player’s career, surpassing the $771,765 he earned as the winner of the WSOP $5,000 no-limit hold’em six max event in Las Vegas this summer. These two huge scores were enough to move him into 26th place in the POY standings.