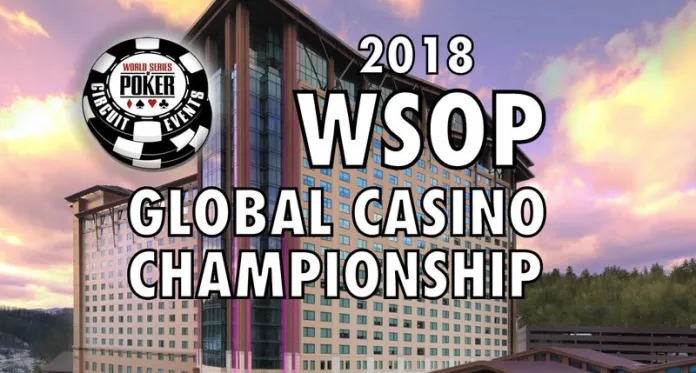 Bagging over one million in chips Wednesday evening, poker pro Jeremy Meacham led the six finalists for Day 3 of the 2018 WSOP Global Casino Championship. The prestigious tournament returns to Harrah’s Cherokee Casino Resort for the fourth year in a row and the winner will take home more than 280,000 and a WSOP gold bracelet.

The 14th season the World Series of Poker concludes this week with the Global Casino Championship, which runs from August 7 through August 9. On Tuesday, a total of 127 players from the United States and the world gathered for prestigious bracelet event and paid the $10,000 buy-in, accumulating a total prize pool of $1,050,000. The attractive prizes for those who managed to make it to the 20 cash places were perfectly in line with the venue, the luxurious Harrah’s Cherokee set near the beautiful Great Smokey Mountains.

Only 53 players out of the 127 entries continued to Day 2 of the championship and were led by the experienced player from the Czech Republic Martin Kabrehl. Despite his great collection of titles, however, King’s Casino Rozvadov Casino Champion Kabrhel finished on the money bubble when he was eliminated by Arkadiy Tsinis. Those who reached the final 20 spots were guaranteed $12,889 and among the famous names to walk out early were three-time Circuit ring winner Joseph Cheong (20th), six-time Circuit ring winner Joshua Turner (19th), and three-time gold bracelet winner David “The Dragon” Pham (14th).

Renowned Canadian player and nine-time Circuit ring winner Ari Engel finished 12th, while Kurt Jewell from the US left in the 8th place. Following him, Blake Whittington was eliminated by Tsinis and received $37,627 for his 7th place finish. The final six competitors will return to the poker table Thursday at noon, led by Jeremy Meacham who comes with the biggest stack of 1,460,000 chips.

Only 6 Players Return at the Final Table Meachan, a player from Oak Bluffs, Massachusetts, bagged more than 1 million chips on Wednesday but the fight for the top place and the gold bracelet will not be easy for him. He is followed closely by Loni Harwood from Staten Island (1,427,000) and Kevin Stamen from Cincinnati and his 1,393,000. Miami’s Arkadiy Tsinis has 1,220,000 in chips and fifth in the chip ranking is Warren Sheaves from Chapel Hill, NC, who has a significantly small stack of 494,000. Armin Stocker from Switzerland is on the bottom with 409,000.

The final Day 3 of the 2018 WSOP Global Casino Championship starts at noon on August 9 and by the evening, the event would already crown its winner. The player who manages to survive until the end will pocket a cash prize of $282,113, while the prize for the runner-up is $174,360. Everyone else will take home a minimum of $48,926, quite a nice guarantee for being at the final table of the prestigious 2018 WSOP GCC event.