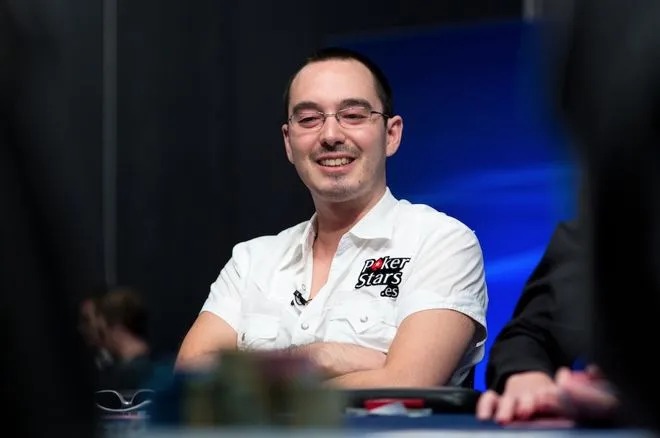 This is the first of a two-part article examining the speech patterns of William Kassouf, a talkative player featured in this year’s coverage of the 2016 World Series of Poker Main Event on ESPN. In the U.K. and elsewhere, this kind of during-hand talking is known as “speech play.” We’ll see if we can find some patterns in Kassouf’s speech play.

First, it’s important to say that in respect to Kassouf, the footage from the Main Event is admittedly a small sample size. It’s entirely possible Kassouf is more balanced in his behavior than I will lead you to believe. I base my observations on the WSOP footage of him I’ve seen thus far and on general common patterns.

I also want to say I thought Kassouf put on a great show. He was almost the only entertaining thing I saw in this year’s WSOP footage thus far (I haven’t seen the last few episodes yet). I respect Kassouf for going out on a limb in trying something risky, especially against some players he knew were very experienced, and for attempting to entertain spectators in a game that can often be a bit boring to watch.

First, let’s try to understand Kassouf’s general modus operandi. He liked to ramble verbally in many spots and most of this patter was made up of what I call strong-hand statements. Here are some examples, which Kassouf repeated many times in various iterations:

When doing the research for my book Verbal Poker Tells, one of the major things I got in the habit of doing was trying to categorize a player’s statements into weak-hand statements or strong-hand statements. These categories are kind of self-explanatory:

In practice, these statements can range from very direct to very subtle and ambiguous. But it can help to attempt to categorize sentences this way, as they can help reveal valuable patterns.

Strong-hand statements are hard to interpret. Both players with strong hands and weak hands are capable of making strong-hand statements. Bluffers understandably want to imply strength about their hand. But players betting strong hands are sometimes just very relaxed and don’t mind implying strength about their hand (and sometimes they are purposefully trying to “level” an opponent to get a suspicious call).

It also makes sense that Kassouf’s patter, and most talkative player’s patter in general, consists mostly of strong-hand statements. Most hands
played by the average, decently-aggressive player are not that strong. So in most spots, players are happy taking the pot down preflop or on the flop. This is especially true in a tournament, where tournament life is valued highly and small chip gains are important. And it’s even more true in the WSOP Main Event, where tournament life is even more valuable.

Value of strong-hand statements as defense

For example, when Kassouf three-bets and tells you, “I’ve got a big hand now, big hand,” even if you know he’s probably full of it, you’d hate to shove and have him actually have a big hand. The verbal aspect adds a little extra drama to the situation. It stings more when you’re wrong. Even though you might have had very valid reasons for shoving, or were entirely ignoring his talking, it can easily feellike you were tricked or outplayed.

These things affect recreational players more than skilled players, of course, but taken as a whole, these statements do have more of an effect than you’d think in slowing players down.

One of the kinds of statements that I try to listen for are misdirections. Misdirections are statements intended to direct attention away from the real reasons a person is doing something.

For example, a player facing a raise says, “Oh, is Johnny raising again? He’s always raising. Let’s raise it up.” By implying his opponent’s aggression is the reason for his raise, he wants to misdirect attention from the real reasons for his raise — probably that he has a strong hand.

Another way to make an indirect weak-hand statement is to imply that an opponent’s hand is weak. For example, when a player tells an opponent, “You must have nothing, I’m all in,” the implication is “I don’t need a very strong hand to beat you.” It is an indirect weak-hand statement. Here’s an article I wrote that analyzes the many misdirections in the movie Rounders.

Another aspect about statements like “I know you don’t have a hand” is that they are goading statements. Shoving and telling an opponent “I know you have a weak hand” might result in them calling to show you their hand is strong. Or it might piss them off and they’ll call out of frustration.

Goading from a bettor is a very reliable tell of strength, and this is another thing we’ll look for with Kassouf. Bluffers don’t want to anger someone accidentally and trigger their “calling reflex” (as Mike Caro called it in his Book of Tells). Bluffers will usually be quite conciliatory in their mannerisms. If they talk, they’ll use neutral statements.

This is why in Kassouf’s case you’ll notice, if you watch all the episodes, that in most bluffing spots his language is very conciliatory and unthreatening. He sticks to his normal patter. (The main exception to this is when he called the clock on his opponent when betting his counterfeited nines on the river.)

This sets the stage for some analysis of some actual cases of Kassouf’s talking. Look for the second part of this article tomorrow where I’ll examine closely four hands from the WSOP Main Event featuring Kassouf.

Zachary Elwood is the author of Reading Poker Tells and Verbal Poker Tells, and the creator of a poker tells video series (www.readingpokertells.video).