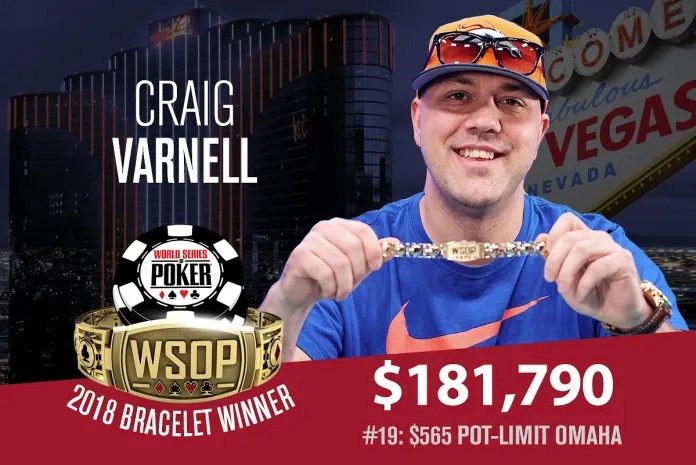 Craig Varnell has come a long way from four years ago when he left his job at a car wash to start playing poker for a living. His efforts were rewarded last night when the player remained the last man standing from the hefty field of the 2018 WSOP $565 Pot-Limit Omaha to win what many consider the most coveted non-monetary prize in poker – a gold bracelet from the series.

Moments after his career’s biggest win, the player said that it was a great feeling to get “the highest accomplishment” in a game he has been playing for a living. Varnell further dwelt that poker meant so much more to him than just a profession as it helped him escape some really dark places in the past.

Back to the $565 Pot-Limit Omaha tournament, Varnell was part of a field of 2,419 entries. The event kicked off June 8 and played through Sunday, June 10. The final day began with an unofficial final table of ten players. Maxime Heroux led the final ten with 2.43 million in chips and a comfortable advantage over his remaining opponents. Varnell was among the top stacks at the time and felt just as comfortable to proceed and execute his strategy.

The game was off to a slow start as players played cautiously, trying to secure a spot among the final nine and then further into the day without getting into much trouble. Unlike his opponents, Varnell was not afraid to put some pressure and initiate action at the table. In most of the cases hands were not even played with his tablemates folding pre-flop and him ending up with the chips. This helped the player accumulate over a million in chips.

Varnell said that he had a “feeling for the game” and oftentimes relied on that feeling instead of doing math in his head before making a move at the table.

The start-of-the-day chip leader, Heroux, remained the hardest nut to crack at the table up until four-handed play when he busted eventually. From that point on, Varnell navigated quite easily to eventually scoop the title and the first-place prize.

Varnell played heads-up against Seth Zimmerman. The eventual champion had a 6-1 chip advantage at that point, but saw some resistance from his final opponent. Zimmerman managed to double a couple of times and even take the lead for a very short while.

After relinquishing the chip lead, Varnell quickly regained momentum to bring down his opponent. On what turned out to be the final hand in play, Zimmerman had 1.6 million in chips to Varnell’s 10.5 million. The eventual runner-up finisher went all-in pre-flop with [Ad][Kh][Qd][4h] to Varnell’s [Kd][Jc][9s][5s].

Despite Zimmerman’s pre-flop advantage, the board eventually ran out [Qs][Jh][3d][6s][9d] to give Varnell two pair and the title. Zimmerman collected a consolation prize of $112,347 from the payout desk, while Varnell was posing with his shiny gold bracelet, knowing that he had just added $181,790 to his poker bankroll.